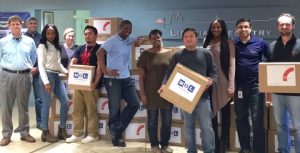 LISCR staff with the MOL packages

The Liberian Registry has used a $10, 000 donation from Mitsui OSK Lines (MOL) to procure medical supplies to help combat the spread of Ebola in Liberia.

The supplies, comprising essential materials and medical equipment such as PPE (Personal Protective Equipment) suits, gloves, goggles and respirators, arrived in the Liberian capital, Monrovia, on 5 November. They were shipped by air from the United States by TNT, which covered all shipment costs.

Scott Bergeron, CEO of the Liberian International Ship & Corporate Registry, the US-based organisation which manages the Liberian Registry, says, “We are extremely grateful to our client, MOL, one of the most powerful shipping companies in the world, for donating resources to the critical situation in Liberia. We are indebted, also, to TNT, for its generosity in covering all shipment expenses. For our part, we will ensure that all the materials are physically received and transferred to hospitals as directed by Liberia’s Minister of Health.”

The Liberian Administration is deeply saddened at the tragic loss of life resulting from the Ebola virus, and is committed to providing whatever assistance it can in these difficult times. Meanwhile, it has taken every precaution to ensure that the Ebola virus does not affect the Liberian Registry in either an operational or financial sense. The registry is managed from the United States, from where its global operations are administered. Its ships and crews, and its operations, are not directly affected by the virus in any way. The registry is operating as normal, and continues to offer the first-class service, innovation and financial strength with which it has become synonymous.

Meanwhile, the YCF Group, the parent organisation of the Liberian International Ship & Corporate Registry (LISCR, LLC), has been extremely active in the fight against Ebola, providing assistance to government, non-profit and community groups. Its ongoing help has included significant technical and equipment contributions towards setting up a national Ebola call centre in Liberia, and providing senior executives to manage a national Ebola task force.  The YCF Group has also donated building materials to the C H Rennie Hospital in Kakata for improving its infrastructure and ability to quarantine Ebola patients more effectively.

Other initiatives undertaken by YCF include help in setting up community hand-washing stations, liaison with health authorities to publish Ebola awareness messages, the creation of a special radio bulletin designed to raise awareness about safeguards to protect health, and the launch of a Good Morning Liberia marketing campaign, which provides free credit every morning to enable subscribers to check on friends and family.

The Liberian Registry and the YCF Group are committed to providing a sustainable and state-of-the-art communications network during this emergency period. The registry is maintaining business as usual, while taking all necessary precautions to protect its employees, as well as providing meaningful support to the Ebola plight in Liberia, wherever it has the ability to do so.

—  The Liberian Registry is one of the world’s largest and most active shipping registers,  and has long been considered the world’s most technologically advanced maritime administration. It has a long-established track record of combining the highest standards of safety for vessels and crews with the highest levels of responsive service to owners. www.liscr.com

Guidance to help shipowners and vessel masters prepare for the prevention of the spread of Ebola is available at: