Ruscon looks to double service from the Russian Pacific to Moscow 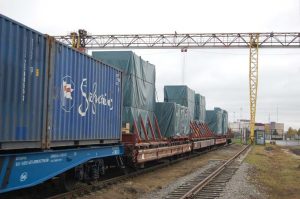 The train departs from Vostochniy every Sunday, arriving at the GCS-owned MANP terminal in Moscow 11 days later.

Ruscon, part of the GCS Group, is considering doubling the frequency of its weekly fixed day intermodal service from the port of Vostochniy in the Russian Pacific to Moscow.

The block train service, with a transit of just 11 days, has proved so popular with shippers from China and south-east Asia that it is already running close to capacity.

“The reliability and speed of the service, including our unique ability to deliver the containers to final consignees anywhere in Russia, has attracted both Russian importers and international customers, ” says Andrey Chernyshev, Director Sales of GCS.

The intermodal service, with a capacity of 154 TEU, was initially launched earlier this year mainly to offer shippers in the Moscow region a fast regular rail link to the Russian Far East via Khabarovsk.

“Since then we have also been building a customer base for a wide variety of cargo, including FMCG products, machinery and foodstuffs, on the westbound leg as well, ” explains Mr Chernyshev.

The train departs from port of Vostochniy, near the city of Nakhodka,  every Sunday, arriving at the GCS-owned MANP terminal in Moscow 11 days later on a Thursday. The terminal has a fully equipped container yard, bonded storage and warehouses for container stripping if required,  as well as a trucking fleet for on-carriage to end customers.

“Our intermodal service from Vostochniy is unique in that we offer delivery to the full range of final destinations in European Russia – from the north-west, including the port of St Petersburg, to southern Russia. These are both areas where Ruscon and GCS have many years of experience and expertise, ” he says.

GCS, one of the top ten container transport companies in Russia and the CIS, has invested heavily the MANP terminal, 45 km south-east of Moscow, since it acquired the facility in 2006. It offers regular intermodal services to a range of destinations in inland Russia, including the most remote provinces.

These rail services offer fast reliable links for shippers sending cargo to the Urals, Siberia and the Russian Far East, and also help ensure that producers in those areas have sufficient containers for export.

“We have been delighted with the response to our weekly intermodal service between Vostochniy and Moscow, so we are looking at launching a second service to meet demand, ” says Mr Chernyshev.

The total number of containers dispatched since the pilot run of that service in August is 1100 units or 1797 TEUs.

Global Container Service (GCS) has worked successfully in the Russian container market since 1995. Beginning as a liner agency, today it is among the top ten container transport companies in Russia and the CIS. GCS belongs to one of Russia’s largest transport holding companies, Delo, which also owns several terminal assets in the port of Novorossiysk.

The GCS Group consists of seven companies in various fields of container shipping including agency, logistics and terminal operations. It is active in all of the major container ports and provinces of Russia, as well as in neighbouring CIS countries and overseas.

The group has ambitious plans to continue to expand its existing companies and to add new ones in order to meet the growing demand for professional transport services in Russia, the CIS and further afield.

GCS has announced a strategic target of doubling its container throughput and tripling revenue over the next five years. This will be achieved through consolidation of its vertically-integrated systems to enable seamless delivery of containers to any destination in Russia and worldwide.  GCS relies on its 1, 200+ staff and close partnerships with leading Russian and international transport companies to help it meets its targets.

Ruscon, the multimodal subsidiary of GCS, is one of the leading transport operators in the Russian container industry. Its experienced team of approx. 900 people in 11 offices throughout Russia and CIS handles over 200, 000 TEU a year.

Based on a combination of GCS-owned facilities and cooperation with leading international and Russian logistics providers, Ruscon manages cross-border and cross-continent product flows to and from Russia. The company provides comprehensive supply chain solutions by arranging ocean freight, deliveries by truck and train, terminal handling, storage and forwarding.

As Arctic opens, US should lead in writing rules for a new ocean