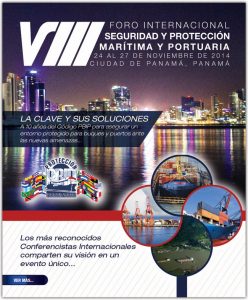 The Maritime Chamber of Panama recently announced that it will be welcoming a large number of local and international public and private dignataries attending the International Forum on Security of Ships and Port Facilities to be held on 24-27 November 2014 at El Panama Hotel. The Forum is held at the regional level, but with an international presence, since 2005, in a different country each year. The Forum brings together regional representatives of all ports and maritime concerns in order to discuss, analyze and present proposals on current issues related to securiy in the context of the International Ships and Port Facilities Code, the ISPS Code, as it is usually called.

Captain Orlando Allard, the ISPS Code Network Delegate in Panama and local organiser of the event announced that representatives from just about all South American maritime and port administrations have confirmed participation; in addition to delegations from Mexico, Africa, the Caribbean, Central America and Europe. The Forum is also expected to attract a large number of delegates from private concerns offering security products and services in Panama, as well as delegates from public institutions and universities.

The Forum promotes the exchange of information, experiences and best practices among managers and operators of shipping, port and logistics services installations, including value added and supply chain operations in the region. The Panama Canal Authority and the Maritime Authority of Panama are co-organizers of the event, whilst the Maritime Chamber of Panama hosts the event, expected to attract approximately 400 to 450 delegates from Europe, the Caribbean region and the rest of Latin America.

More than 21 Latin American countries are represented in the Forum; over four Caribbean and five European countries will send representatives, with the participation of more than 400 local and international delegates. More than 25 international and local experts on maritime and port security will participate in expert presentations and roundtable discussions. In addition, during the plenary sessions the Latin American and European Correspondence Group will present draft proposals to revise and improve the ISPS Code will be discussed in order to prepare appropriate submissions to the International Maritime Organization (IMO).

The Forum speakers include representatives from the Inter-American Committee on Ports; the European Commission; the Organization of American States; ECLAC; the Maritime Port Institute of Angola; the Naval Prefecture of Argentina; the National Ports Authority of the Republic of Uruguay; Guatemala National Committee on Ports; COCATRAM; American Association of Port Authorities; Polytechnic University of Madrid; Port of Bahia Blanca, Argentina; Petroecuador; JAPDEVA; and many more.

The Forum also includes visits to the Canal Expansion Project, the Atlantic and Pacific ports, Colon Free Zone and Special Economic Zone at Howard on the Pacific side. For more information, contact: (507) 2090289 – (507) 66767685 – asistentejg@gmail.com – www.foropbiplive.com – www.redpbip.org