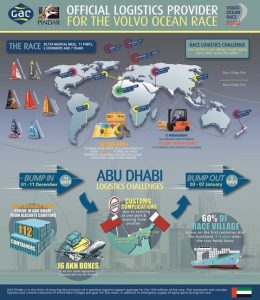 Abu Dhabi – 17 December 2014: The leading boats of the Volvo Ocean Race have now arrived at Khalifa Port. Behind the scenes GAC Pindar’s logistics team ensured that the original race village from Alicante was safely delivered and re-built in Abu Dhabi, 62 days and 11, 672 nautical miles later, after leapfrogging the second race stop in Cape Town.

As the official logistics provider for the Volvo Ocean Race, GAC Pindar’s role includes the logistics and customs clearance of each race village in each port. Each stopover provides GAC Pindar with a host of unique logistics challenges and Abu Dhabi was no different.

Lukas Jönsson, GAC‘s On Ground Team Manager for the Volvo Ocean Race, says: “Between our travelling colleagues from specialist yachting and sailing events experts GAC Pindar and our colleagues at GAC Abu Dhabi, we had eleven permanent staff working round-the-clock to make sure the whole operation was completed without a glitch and we’re proud that our efforts ensured that the Abu Dhabi race village opened on time.

“It has been a busy period for large sporting events in the region and we’ve had to compete for time with the customs officials with the likes of the Abu Dhabi F1 Grand Prix, DP World Tour Championship golf and the ISAF Sailing World Cup. To further complicate matters, the 112 race village containers arrived through Kahlifa Port, Abu Dhabi, but will depart via Jebel Ali Port in Dubai so we have to take care of two different sets of customs officials and two sets of paperwork.”
Due to the sheer size of the race – 38, 739 nautical miles in just nine months spanning five continents and eleven ports, including a pit-stop in The Hague – two identical race villages are leapfrogging each other across the globe.

“While the race village is open our ongoing role includes the management of boatyard deliveries and material handling so that we are on call 24/7, ” adds Jönsson. “We then have the responsibility of the all-important ‘bump out’ to make sure the race village is ready to be shipped onto Auckland, the fourth stopover of the race. The first air freight containers will depart immediately after the race boats and within three and a half days 60% of the race village will leave for Auckland.”