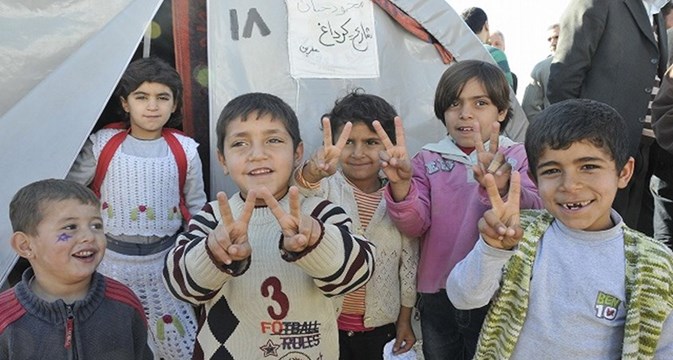 International trade union representatives on a fact-finding mission to the Turkish-Syrian border found local authorities struggling to support Kurdish refugees fleeing the barbaric violence of the Islamic State (IS) in Iraq and Syria, and called for greater transparency on how Turkey has spent and distributed international aid.

The trade unionists visited Fidanlık and Viranşehir camps, which are homes to hundreds of Yazidi refugees who had fled from Sengal, northern Iraq. In Suruc, 70, 000 refugees from Kobani, Syria are accommodated in villagers’ homes and in half a dozen camps.

They found that international aid managed by the Turkish government is less accessible for Kurdish refugees than for Syrian refugees: municipalities in the Kurdish region along the border testified that they receive no financial resources from the central government. All supplies, such as tents, clothing, food, water and electricity, have been provided by local communities, with Turkish trade unions giving medical, educational and other assistance.

With winter approaching, the refugees urgently need weatherproof tents, heating, hot water, blankets and warm clothes. As the local authorities lack the necessary resources, the mission pledged to try and raise funds from its affiliates and urged all international trade union organisations to do the same.

ITF inland transport secretary Mac Urata said: “It was heartbreaking to hear the refugees’ stories of the man-made horrors in Iraq and Syria, which include women being raped and enslaved by IS. But it was heartwarming to witness the compassion and practical support being given to the refugees by the local authorities, communities and trade unions.

“Even small donations from trade unions around the world would give the refugees hope and recognition. This is not about charity but about solidarity. It is also an extension of our solidarity with Kurdish trade unionists in Turkey who are thrown into jail as ‘terrorists’.”

The union delegation issued its call to the Turkish government at a press conference near Kobanî, a Syrian city recently under attack by IS troops. It will use its report of the mission to press international institutions to demand greater aid transparency and fair distribution by the Turkish government.

HFW Briefing – Good faith, honesty, and reasonableness: goodwill to all?