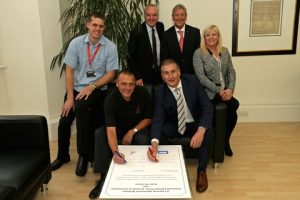 The port of Grimsby and Immingham has become the first in the Associated British Ports (ABP) group to sign a formal learning agreement with trade union Unite. The agreement will see the appointment of a dedicated Union Learning Representative and will make it easier for employees at the port complex to access education and training opportunities.

It is hoped that this Learning Agreement will be the first of many for the ports operator, whose investment in training per employee is currently 30% above the UK average.

The Learning Agreement sets out ABP’s commitment to lifelong learning and its desire to help its workforce access education and training that will allow them to develop their existing skills and learn new ones. It is hoped such opportunities will help workers progress within the company and deliver an improved service to customers, or even embark on a new career.

ABP’s new Union Learning Representative is Immingham Bulk Park Site Coordinator Andy Griffiths, who will act as a link between the company and Unite.

Andy will be instrumental in identifying and organising training and will provide his colleagues with advice on available opportunities, as well as guidance and support for anyone taking a course. He will also be responsible for setting up learning spaces on the port estates to ensure that accessing training is as easy as possible for his colleagues.

“We identified a need for increased learning opportunities for staff here in Grimsby and Immingham and following talks with Unite, we decided to team up to put an agreement in place and ensure that we did it properly and had a structure in place, ” said Andy.

“It will be my job to be the ‘face’ of the agreement and I’ll be responsible for engaging with colleagues and advising them on appropriate training, highlighting opportunities generally among the workforce and identifying learning spaces and setting up steering committees.”

ABP Director Humber John Fitzgerald explains why he felt it was important to offer staff more training and education opportunities.

He said: “A business relies on its staff, and here in Grimsby and Immingham we’re no different. If we can give our workforce the chance to develop and increase their skills base we give them confidence and we empower them. They know we are willing to invest in them and in doing so, they see we feel they are worth investing in and that if they want to grow and progress, we will help them do that.

“The freedom afforded by education should never be underestimated and it’s very satisfying to be able to offer these opportunities to colleagues, especially as it’s alongside an organisation like Unite, which has fantastic reputation as a provider and facilitator of lifelong learning. I’m really looking forward to seeing the impact this agreement has on our workforce.”

The agreement was signed at an event held at the Port of Grimsby, which was attended by ABP union representatives as well as the Unite lifelong learning team, which included their Head of Lifelong Learning, Kenny Barron.

Mr Barron said: “Learning agreements such as this one are more than just signatures on a piece of paper; it’s about the future, about having faith in your employees and your colleagues and more than that, it’s good business.

“The benefits of lifelong learning are well documented – it increases productivity and morale and encourages progression. Unite believe in flexible learning, and learning for all regardless of age, background or job title.

“We are also committed to curriculum development to ensure training opportunities are always current and meet the skills requirements of not just the employee, but the employer. We are excited to be working closely with ABP in Grimsby and Immingham and seeing the benefits this agreement will bring to the business and its staff.”