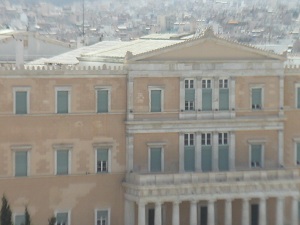 Rejecting the only candidate and calling a snap election will only make things worse in Greece, its periphery, Eurozone, Europe and the world at large… Those MPs though who preferred to express their ego and put same before Greece’s national interest will fail too to be re-elected and the blame should be shared by all given this result.

We have tried to make Greeks understand their ultimate interest long ago; we have asked Greece’s friends abroad to support the right way and view. Now the shit will hit the fan but to the detriment of the Greek public and not that of the politicians.

We hope that all MPs come down to their senses and the Greek voters to vote in the coming election with pragmatism. Populist blah blah led Greece to this result today, forty plus years following the restoration of “democracy”. Is this the democracy to vote for? A “democracy” that brought Greece’s debt to skyrocking heights and spoiled a healthy and wealthy country’s progress?

As for the shipping industry and Greek shipping for which we have also in the past make references vis-à-vis the political aspects influencing same, who ever wins must decide whether he/she wishes Greek shipping, to all intents and purposes to retain its lead or else worldwide.