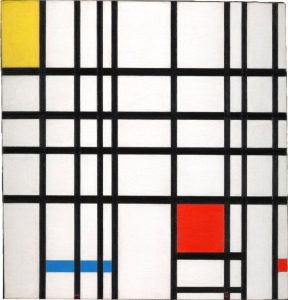 Is it art?  This is an enduring question about abstract art. The answer is that in its great manifestations, it is art and it is about much more than art. It embodies the progress of society; it has acted as a motor for change and invention in diverse fields — civil engineering, construction and even merchant shipping, for example – and has played a part in the emancipation of women.

This intimate relationship with the modern world over the past century is elucidated brilliantly in a magnificent new exhibition at London’s Whitechapel Gallery.

Its opening gambit is the painting by avant-garde artist Kazimir Malevich of a stark black square, first shown in Petrograd 100 years ago. It was a clear break from figurative art, and although far from obvious, it was meant to suggest “the supremacy of pure feeling in creative art.” Two years before the Russian revolution, Malevich was investigating new means of expression alongside creative talents in many fields. In his subsequent work he aimed to stimulate interest in building design and scientific concepts, such as flight and wireless telegraphy.

Malevich’s works of what he called Suprematist art were indeed iconic – they would hang where viewers were used to raising their eyes to revere religious icons.

From that aesthetic turning point, Whitechapel proceeds to relate, as the show title suggests, the Adventures of the Black Square: Abstract Art and Society 1915 – 2015. Malevich’s exploration of geometrical form would influence his Soviet colleagues Lyubov Popova, Alexander Rodchenko, and El Lissitzky, and schools of art in Western Europe and America.

Many of his followers in one form or another are among more than 100 artists feted in this centennial exhibition, which is praiseworthy in its determination to demonstrate how art relates to society and political movements. Across six exhibition spaces, it succeeds in those ambitions, showing how the spirit of the new art fed into fields across the scientific spectrum, and around the globe.

The curators, Iwona Blazwick, who is the Whitechapel director, and Magnus af Petersens, Whitechapel’s curator at large, harvested the exhibits from far and wide. Ms Blazwick described the show as “our big adventure, ” saying it was a “fantastic journey” through the development of geometric abstraction. Journey is the right word, because there are insights into the history of the genre in Asia, the US, Latin America and the Middle East.

Ms Blazwick said that the more she and her team investigated the theme, the more they found that as opposed to the conventional narrative that the movement spread from Russia, Western Europe and the US, it had global presence.

Malevich’s block paintings stimulated the search for new aesthetic and political horizons, and, seized upon by artists from Vladimir Tatlin to Hélio Oiticica, allowed them to “stride into a radical future, ” said Ms Blazwick.

The show explores too the theme of architectonics, here related to “floating geometries that propose new social spaces as imagined by Lyubov Popova or Piet Mondrian and Liam Gillick.” In our everyday life the grid forms explored by such artists have translated into city street planning, notably in the US.

Many of the artists represented at the beginning of the show paid for their boldness and experimentation with execution or exile. That could not stop the many magazines and manifestos, samples of which are on display at the Whitechapel, spreading their ideas over the world, as they reached for a universal language.

Far from converting art to mystique, the artists were looking for new forms of communication, and this is seen in their respect for the new technology of their times, although that was a weapon that was to be taken up both tby he most revolutionary and repressive forces.

Signal in this regard is a gelatin silver print by Aleksandr Rodchenko showing the radio broadcasting tower near Moscow designed by Vladimir Shukhov. The engineering feats of Shukhov came to symbolise industrial design in areas including shipping and energy, including the first Russian oil tanker. The 160 m free-standing steel tower was built in 1920–1922, amid the privations of the Russian Civil War. More recently, the tower was under threat of demolition until a campaign in 2014 persuaded Moscow City Council to issue a preservation order.

As the early proponents of abstract art began travelling outside the USSR, they planted lasting seeds, such as founding the first museum of modern art in Poland, the Muzeum Sztuki (Museum of Art) in the city of Łódź. The institution’s holdings originate from the International Collection of Modern Art, presented to it in 1931 by the a.r. (Real Avant Garde) group founded by Władysław Strzemiński. Strzemiński had lost an arm and leg during war service in 1916 and two years later attended classes at the First Free State Workshops in Moscow, where he met Malevich and Tatlin.

He began exhibiting Constructivist works and with his wife Katarzyna Kobro led artistic workshops. In the London exhibition is a copy of the magazine Blok which published his avant-garde principles, and there are spatial compositions by Strzemiński and Kobro.

The London exhibition makes clear that many of the breakthroughs in this genre were made by women.  For instance,   when Anni Albers (1899–1994) joined the Bauhaus in Weimar in 1922, she was barred because of her gender from studying architecture, and ‘relegated’ to the weaving school, which she turned to advantage by successfully exploring the use of textiles for geometric art, including wall hangings. While she was revitalising the tradition of fabrics as an art form, her husband Josef whom she met at Weimar designed stained glass windows, furniture, household objects, and an alphabet.

In Rio de Janeiro, Lygia Clark (1920-88) and Lygia Pape (1929-2004) co-founded Neo-constructivism in 1950. Clark’s sculpture Bichos (creatures) consists of hinged plates of metal which could be arranged by the viewer into different shapes. Pape busied herself with installations, sculpture, film, ballet and video art.

Loans here come from collections including the Moderna Museet, Stockholm; Museum of Contemporary Art, Barcelona; Art Institute of Chicago; Greek State Museum of Contemporary Art –  Costakis Collection, Thessaloniki; National Galleries of Scotland; Tate, London; and Van Abbemuseum, Eindhoven. Insurance is always a big factor with such extensive shows, and in this instance the UK Government has provided Indemnity, arranged by the Department for Culture, Media and Sport and Arts Council England.

Adventures of the Black Square: Abstract Art and Society 1915 – 2015, runs until April 6 2015. There will be a series of linked displays, commissions, talks and performances.