Red Star Line, a ‘forgotten’ shipping giant of the Atlantic… 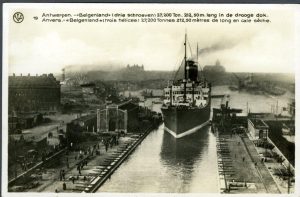 Red Star Line, a ‘forgotten’ shipping giant of the Atlantic, is celebrated at the Antwerp museum that bears its name

A new museum in Antwerp is bringing to the 21st century public the ‘forgotten history’ of the great Red Star Line, which took streams of migrants from the port to America just over a century ago. During World War I, the line was forced to decamp to the safer home port of Liverpool.

Red Star Line Museum, which opened its doors in autumn 2013, currently is holding an exhibition entitled Far from the War? This recounts the stories of many Belgians who had migrated to the United States and fretted endlessly about what was going on in their homeland during the slaughter of World War I. Just before the war, Belgian migration to the US had peaked, and it suddenly became almost impossible to contact family members who had stayed behind. 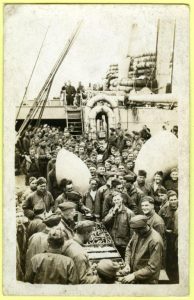 American soldiers on board the Kroonland, around 1917. (c) Friends of Red Star Line.

The theme is in line with the mission of the museum to bring to life the fate and fortunes of some of the 2m people – many of them Jews from East Europe – who travelled on the steamers between 1873 and 1934. The museum is set in restored warehouses which were departure points for the hopeful passengers who travelled third-class, apparently not quite the ordeal it sounds.

The museum project got underway in 2004 when Antwerp city council decided to turn the historic buildings of the shipping company into a place of remembrance open to the public. A year later the city purchased three former Red Star Line warehouses from the Port Authority. The New York firm Beyer Blinder Belle Architects & Planners was called in to restore the buildings and design the interiors.

After negotiations with King Leopold II and Antwerp city council, the Société Anonyme de Navigation Belge-Américaine or SANBA, a subsidiary of International Navigation Company, was formed in September 1872. Von der Becke and Marsily were put in charge of the company and allotted 10% of the shares. Their ships sailed under the name Red Star Line, which became from 1902 as did White Star Line, a subsidiary of International Mercantile Marine Co, a conglomerate controlled by financier JP Morgan.

When the Great War broke out in 1914 and Germany invaded Belgium, the fleet was evacuated from Antwerp, which meant suspending migrant traffic. The ships sailed almost entirely under British flag from the company’s new European headquarters at Liverpool.

During the war, the ships were used as hospital ships or for transporting American and Canadian troops. They carried cargo and brought relief supplies from America to Belgium via the Netherlands.

Red Star Line resumed sailing from Antwerp in autumn 1919, and added three departure ports for migrants. These were Liepāja in Latvia (formerly known as Libau, which had been a key port for the Russian Empire), the Free City of Danzig (now Gdańsk, Poland), and Hamburg. On the other side of the ocean, Halifax in Nova Scotia became a new destination. 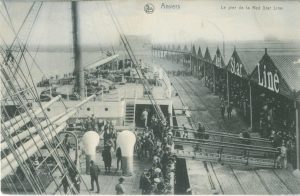 When the US clamped down on immigration in 1921, it crushed one of the main businesses of the line, but the company put on a brave face to celebrate its 50th anniversary in style in 1923. The Belgenland, the largest ship in the fleet, made its inaugural call that year at Antwerp. Launched at Harland & Wolff as the Belgic for White Star Line and assigned to Red Star Line after the war, this was the flagship of the Antwerp company. The world’s ninth largest ocean liner, with capacity for 2.700 passengers, the Belgenland was 212 m in length and completed five world cruises.

To offset the impact of declining migration, Red Star Line switched its focus to tourism and importing American cars, but these avenues too proved unprofitable. 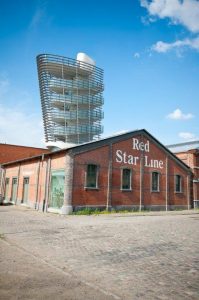 The final blow was the New York Stock Exchange crash of 1929. Red Star Line was down to 4, 000 passengers in 1934. Soon afterwards, the Belgenland, under the name Columbia became the largest vessel flying US colours, but the cruises she made were uneconomic and she was scrapped in 1936, in Scotland.

Among the museum exhibits is a scale model of the first Red Star Line ship,  De Vaderland, which, it is claimed, was the first steam-powered oil tanker, although it could not function as such because of an American ban on the transport of oil and passengers in the same vessel. For that reason,  De Vaderland carried dry cargo and passengers only. 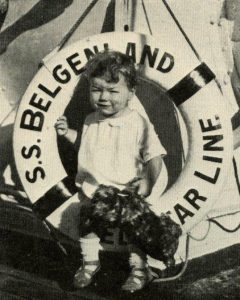 On deck on the Belgenland, Feburary1929. ( c) Friends of Red Star Line.

The showpiece in the museum boiler room is the shipping company’s original memorandum of association from 1872, on loan from Friends of the Red Star Line.

In the section dedicated to Antwerp, the museum shows historic photos of the Rijnkaai and the mooring quays used by the Red Star Line. The photos were found a short time ago in the archives of the Port Authority and in the collection of the ‘Nationaal Scheepvaartmuseum’ (now part of the MAS|Museum aan de Stroom).

The 17, 540 gt Lapland,  launched for Red Star Line in 1908 at Harland and Wolff, was the largest ship under Belgian flag. She took the 167 surviving crew members of the Titanic back to England 13 days after the White Star ship sank in April 1912.

The temporary exhibition Far from the War? runs until April 5 2015.

Thome Signs up to Neptune Declaration on Seafarer...