Artist Paul Simonon revs up his reputation with still life paintings in his new show ‘Wot no Bike’ at the ICA,  By James Brewer

Paul Simonon, at various times of his life punk music hero and Greenpeace warrior, has established himself as a craftsman in a further discipline, that of painting. He is a thoughtful and technically accomplished chronicler of rock culture, still life, nudes and landscape. An exhibition of 29 of his latest works – all related to his love of riding motorbikes – has gone on show at the ICA in The Mall.

It should add considerable horsepower to the appreciation he already enjoys in contemporary art circles, albeit a more specialist reputation than that he enjoyed while part of the 1980s band The Clash, famed among other impacts for its signature album London Calling. 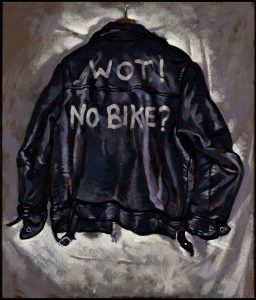 In a contrast to the genial star ‘s previous paintings of Thames-side scenes,  Wot no Bike comprises still life oil works, freshly painted on canvas. Here are the leather accessories to his hobby: jackets, boots, helmets, and gloves, alongside packs of cigarettes and lighters.

In a modernist tradition, the bike is the unseen presence in all but two of the pieces – as is the biker. These are self-portraits without an evident self. The subtitle might have been, “Wot no biker?”

Contrary to the cynical image of bikers, this is a statement of identity without aggression or even worship of speed. Paul’s boots and jackets are laid out not for a thrash but for a modest spin through city traffic, or hung up or resting on a chair after an exhilarating but uneventful ride.

Like van Gogh, he elevates to central subject matter the mundane, and one cannot resist recalling the great Vincent’s humble chair and pipe. In each of five of the pictures, Paul plants a single chair on bare floors as a prop for his biker gear.

Motorbike paraphernalia is clearly a big part of his life. The title picture Wot No Bike? is a painting of his biker jacket hanging up against a rumpled white sheet. In Black Leather, a guitar is shown but has been relegated to the background; chair, helmet and jacket are in the foreground. None of this is threatening: even the pictureGitanes which shows a packet of cigarettes and lighter with a lit cigarette on the edge of a table, has the cautionary inscription Smoking Kills turned towards us.

This true Londoner has been a painter since spending countless days in the studio of his artist father. He studied at the Byam Shaw School of Art. Forming The Clash in 1976 with Mick Jones diverted him from pursuing an early career in art,   but he kept his eye in during his bass guitar days with The Clash and other groups.

When The Clash disbanded in 1986, he went to live in Texas with a musician friend, Nigel Dixon, but when Nigel died from cancer, Paul “jumped ship from music and focused on art.” Returning to London, he took up his paintbrushes and padded around London studying local scenes. Many of his painting expeditions were along the canals and the Thames, and this resulted in an exhibition, From Hammersmith to Greenwich, which included large pieces, 5 ft by 7 ft. 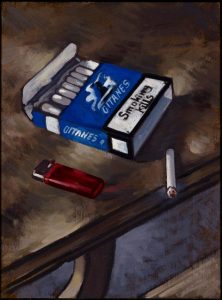 On a bright January day, relaxing on a balcony of the ICA overlooking the broad promenade which runs from Buckingham Palace to Admiralty Arch, Paul told us of his enthusiasm for outdoor painting, and of his dramatic experiences on a Greenpeace ship.

It was a challenge to work in an environment that was constantly changing, he said,  with the play of light – the cold light of winter and the days of softer light. “It stops you being precious about what you are working on. It keeps you fluid, ” he told us. He did the London scenes in situ, regardless of the weather. He recounts in a limited edition hardback book entitled Wot no Bike published to accompany the exhibition, that while painting by the Thames one day, “I had a flash of Roman London. All the bridges and buildings faded away.”

He retains the ideals which led him in 2011 to join the Greenpeace ship Esperanza,  a 72 m ice-class former supply boat, on a mission to protest against drilling in the Arctic by Cairn Energy.

“I was fortunate to be able to get on the ship, ” said Paul. “I did not have any skill as such, so I was offered [the position of] assistant to the chef: you do all the washing up, swab the decks.” The crew spent two months at sea, and with initial stormy weather, “in the first week there was nobody to cook for because everybody was seasick, although I felt at home.”

He was among 18 Greenpeace activists who managed to interrupt drilling by the rig Leiv Eiriksson in protest against an alleged lack of suitable oil spill response plan – which cost him and his co-thinkers two weeks in a Greenland jail. Back in the UK, he joined members of the group known as The Good, The Bad, & The Queen for a performance on the deck of the Rainbow Warrior II in the Thames to celebrate the 40th anniversary of Greenpeace.

Paul said: “I hate cold water, and said to Frank [Hewetson, a Greenpeace organiser], next time we do anything, can we do it in the Caribbean. He replied, don’t worry, if you fall in the water, you only have two minutes to live.”

Paul diverted his attention from one of his favourite themes, the painting of nudes, to complete the biker series. “I am interested in the function and structure of the human body, the way an arm rests,   the flesh against the bone…” he said.