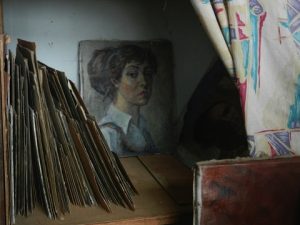 Irina Kovaleva is one of Russia’s most remarkable, and unstoppable, artists. Her work is increasingly being brought to attention in London and other international centres. Now in her 80s, she has lived through epochs of sweeping political change that have had considerable effect upon the arts scene in St Petersburg. She remains a working artist and continues to teach at one of the country’s top institutes. 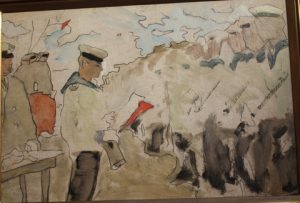 Reading the Oath, 1960s. Oil on board. By Irina Kovaleva.

Several of her canvases were on display at the latest Decorative Antiques & Textiles Fair at Battersea Park (January 20-25 2015), thanks to John Barkes, a renowned specialist in Soviet and Russian art, who knows her and admires her talent.

Her style has both something of impressionism and of what used to be called Soviet realism, but as with many other men and women painting at the same time, there is no mistaking the warmth and spontaneity of approach that shines through each work. Using her left hand, she turns out distinctive genre and portrait paintings in oils.

Irina Kovaleva had a career progression that would have been the envy of many arts students of her age. Born in 1934, she attended Tavricheski Art School, Leningrad, in the 1950s. She went on to study at the famed Ilya Repin State Academic Institute of Fine Arts, Sculpture & Architecture from 1960-1965 under Prof Victor Oreshnikov, and became one of his assistants from 1965-1968. The late Prof Oreshnikov was a much garlanded artist and presided for a quarter of a century as rector over the Repin institute, considered the largest and most important academy of art in the Soviet Union, and with an equivalent status in today’s Russia.

Irina is still Professor of Drawing at the Repin Academy, which is housed in a magnificent building on the Neva River, and named after Ilya Repin, the 19th century giant of the Russian arts world, who helped bring his country’s art into the European mainstream.

Irina joined in 1969 the Leningrad Union of Artists, now known as the St Petersburg Union of Artists, whose many members are noted for their prolific output of Russian scenes of everyday life. The artists’ unions of the USSR had tough entry rules, but offered patronage to enable their members to make a living from their art work – that prop was knocked away with the onset of full-blown capitalism.

Among works by Irina currently attracting interest is one of her brother reading the oath at his naval induction before joining his ship at Kronstadt, the home of the Baltic fleet, in 1962. Another fascinating piece pictures three women seated at a table and is entitled Gossip. She also has works in circulation such as Musicians andOne of the Workers, a man whose rugged face typifies his undoubted strength and determination.

Fortunately, the tradition of painting in which Irina excels is being pursued by a new generation. One such representative is Alexei Kalinin who was born in 1985.

Alexei was also educated at the Repin academy, and his typical works Evgenia Painting and Summer display a similar close sympathy to that shown by Irina for her subjects and subject matter.

Another painter of Summer, but on a larger canvas, was Suren Pipoyan, who was born in 1922, in Armenia (then part of the Soviet Union). After graduating from art school, he joined the Soviet army which was under tremendous pressure during World War II.  He went back to academy study after the war, and his diploma work and much subsequent work was hailed as a great success in Moscow and Kiev. A well received diploma was usually the key to a flourishing career.
This continued through his membership of the Union of Artists of the Republic of Soviet Armenia, and Soviet and international exhibitions, including one in the Louvre, Paris in 1972 He worked on fresco renovation, and loved executing monumental works and portraits of many professions. The central work of his life was his 1980 composition entitled Exodus dedicated to the victims of the Armenia Genocide. Suren Pipoyan, who died in May 2005, is survived by his daughter Lilit Pipoyan, a noted Armenian singer, in a family tradition.

As misconceptions surrounding much Soviet-period art – such as that it was all propaganda and idealisation of heavy industry – are being dispelled, there is today an acceptance that the dedication of many highly-trained practitioners has ensured that the avenue they have trodden is far from a dead end.  There are more examples past and present still be brought to public gaze, and Dr Barkes is playing a leading role in helping keep the legacy alive, and showing new artists that they are appreciated far beyond their homeland. He can be contacted via www.lacygallery.co.uk 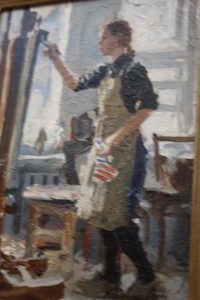