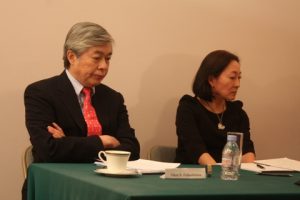 Japan should emulate progressive forces in Britain and the United States to bring more women into the forefront of business life, two authoritative speakers have urged during a debate in London.

Their call led a spirited discussion on the topic of what has been dubbed Womenomics, the empowerment strategy of Prime Minister Shinzo Abe.

It was said at the event, part of the Daiwa Anglo-Japanese Foundation 2015 seminar series with the theme of diversity, that obstacles to progress included tensions over women’s rights within Mr Abe’s administration, and a macho culture in the Diet, the country’s parliament.

Both main speakers, Glen S Fukushima and Mami Mizutori, insisted on the need for Japan to draw lessons from overseas. In terms of gender equality, when measured by the number of women in parliament, Japan in 2014 ranked 127th among 189 countries, according to a survey by the Inter-Parliamentary Union.

Mr Fukushima, who grew up in California and Japan, is Senior Fellow at the Center for American Progress, a Washington DC think tank.  He has been a senior executive in Tokyo of one European and four US multinationals including having been chief executive of Airbus Japan, and was president of the American Chamber of Commerce in Japan. Ms Mizutori is executive director of the Sainsbury Institute for the Study of Japanese Arts and Cultures and is a former diplomat and civil servant.

Mr Fukushima welcomed the government’s initiatives to try to promote the status of women, including the convening of what was called the World Assembly for Women in Japan in September 2014, dubbed by Mr Abe “the Davos Forum for women, ” in which high-profile participants included Christine Lagarde, managing director of the International Monetary Fund, jurist Cherie Blair, and US ambassador to Japan Caroline Bouvier Kennedy.

The prime minister has backed a target of increasing the number of female managers to 30% by 2020, which was first adopted by one of his predecessors, Junichiro Koizumi.

Mr Fukushima said that the government had been active on the PR front, “but I am a bit sceptical about the gap between PR on the one hand and the realities on the other. Merely setting up a few day care centres is not going to solve the problem.”

In many jobs and organisations, people are rewarded on how much time they spend in the office or with customers, rather than performance and results – the system is skewed against the latter, said Mr Fukushima. Managers would rather not make the distinctions between members of staff. It was very difficult for women, especially women with children, to compete on a level playing field, because the men are expected to be in the office until 10pm or 11pm, or go out drinking with customers and clients, or play golf with them at the weekends.

“In a way you are asking Japan to completely change its way of doing business, ” he went on, and the implication was that men should take up more responsibilities in the home – do the laundry, clean the house, and take care of the children, for instance.  There were generational differences but it would be very difficult to get the men to share half of the burden.

Making cosmetic changes was not enough. There were long lists of families that wanted to put their children in day care centres, so that women could have more opportunity to work outside the home. This would require hiring non-Japanese people to help, but the immigration authorities currently do not allow such people to come from other countries for such tasks.

Mr Fukushima cited an instance of a company that promoted women to be account managers. A client called to ask: “Why did you appoint a woman to our account? Do you think our company is so unimportant?” The woman’s boss had to intervene to persuade the complaining company to give her a chance to prove herself – and in the end the client conceded she was highly competent.

Although Mr Abe appointed five women to his second Cabinet, many people had questioned the commitment of four of those five to promoting the cause of women in the workplace.

Japanese female workers disproportionately suffer low status, low pay, and low job security. In the last 10 or 20 years, there had been some progress, but compared to other countries, the change in Japan is not impressive, said Mr Fukushima. The number of women on the board of directors of the 27 Japanese companies on the Fortune Global Top 200 companies had risen from two in 2004 to 10 in 2013. Although this increase from 0.7% to 3.1% represents progress, it is still very low compared to other, especially industrialised, countries.

Ms Mizutori said that in Japan women had never fought in a collective movement for their rights, although there had been many individual activists who strove for women’s rights and civil rights.

“Always, the UK is a good example for us, ” said Ms Mizutori, citing the first consecration a day earlier of a woman bishop in the Church of England. “The important story here is that it was a difficult decision. It was very important that the debate kept on going.”

Ms Mizutori referred to the 2011 report of the former banker and ex- government minister Lord Davies of Abersoch in 2011 into the question of women on company boards. Three years on from that, Lord Davies had spoken of an impressive rate of change in large companies, and said that the voluntary approach was so far working. Women in early 2014 accounted for 20.7% of board positions in the FTSE 100 – up from 12.5% in 2011 and 17.3% in April 2013. Lord Davies set a target in 2011 of achieving 25% in 2015.

Appointing a large number of women ministers to the government in Japan at present “was always going to be a failure, ” said Ms Mizutori. Only 8% of deputies in the Lower House were women. “You have to start with more women MPs and more women candidates.” In the UK, 33% of Labour MPs were women, and the Labour Party had advanced the policy of women-only shortlists, gradually building it up.

Women in Japan are doing better in the civil service, where the government has been more actively promoting women. “We need strong leadership to promote gender equality from the top, but at the same time we also need a debate which engages everybody, ” said Ms Mizutori. The question was what kind of society do you want, “and that is why we want everybody to talk about it. The question of women’s contribution should be an element of the whole debate about diversity, gender and immigration.”

Ms Mizutori said that in numbers, women were doing really well in higher education.  When she took her law course in the early 1980s, there were only five women out of around 200 people in her faculty. Now around 40% of the same faculty were women. Up to higher education women could do very well, but when it came to having a career the situation was different.

Mr Fukushima said that Ms Kennedy, who assumed her post in 2013, was the first woman to serve as the US ambassador to Japan. Many senior officers in the US embassy in Tokyo are women, “and I am sure that sends a signal to the Japanese government.” He added: “I believe some of the changes in Japan will come about thanks to women who have spent time abroad and return to Japan to work, especially those who have worked in non-Japanese companies.”

He said that most of the discussion on women in the labour force had focused on demographics – how women need to be “utilised” to counter the low birth rate, ageing work force,   and shrinking population, but there were signs that some attention is being given to the right of women to work and the right of men to raise children.  Younger men, under the age of 40, are more interested than older men in going home to take care of their children, and they are increasingly taking time off from work to do so.

Chairman of the meeting, Jason James, who is director general of the Daiwa Anglo-Japanese Foundation, thanked the speakers and audience for their constructive contributions, and related an anecdote from his own years living in Japan. During a parents’ evening at a school his children attended, even among an “internationalised” group of Japanese people, the men and the women were reluctant to talk to each other.

The term Womenomics was coined by Kathy Matsui, chief Japan equity strategist at Goldman Sachs, to refer to policies aimed at enabling women to make a larger contribution to the Japanese economy.