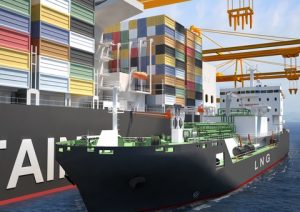 Wärtsilä Corporation, 9 February 2015 at 10 am EET – A specialized LNG Bunker vessel to be built at the STX Offshore & Shipbuilding Company yard in South Korea on behalf of Shell will be powered by Wärtsilä DF dual-fuel engines. The ship will be used to deliver gas to LNG (Liquefied Natural Gas) fuelled vessels in Northwest Europe. The newbuild contract is in direct response to the increasing acceptance by the shipping industry of LNG as a marine fuel. The engine order was placed with Wärtsilä in December 2014.

Wärtsilä has been at the forefront of the trend towards LNG fuelled shipping. Its industry leading dual-fuel engine technology and gas supply and control systems have been largely responsible for the viability of gas as a fuel for ships. The environmental and economic advantages that LNG has over conventional diesel fuels are seen as being crucial to the future development of the global shipping industry.

The new Shell vessel will be based at the port of Rotterdam in the Netherlands, and will load from the new break bulk terminal and jetty to be constructed by the Gas Access to Europe (Gate) terminal. It will also be sea-going and able, therefore, to bunker customers at other locations. It will be powered by three 8-cylinder Wärtsilä 20DF dual-fuel engines capable of operating on either gas or diesel fuels. The engines are scheduled for delivery in spring 2016.

“This new specialized vessel is an important step towards LNG becoming the fuel of choice for shipping in Europe, and Wärtsilä is pleased and honoured to cooperate with Shell and STX in this project. LNG eases compliance with both the new and anticipated future IMO environmental regulations, and we are proud that our development of technologies throughout the gas chain is of increasing value to the marine sector, ” says Mr Aaron Bresnahan, Vice President, Sales, Wärtsilä Ship Power.

“This specialised LNG bunker vessel is a pioneering new design, ” said Dr Grahaeme Henderson, Vice President of Shell Shipping & Maritime. “It will have a capacity to carry 6500 cubic metres of LNG fuel, and will be highly efficient and manoeuvrable. It will be able to load from big or small terminals and to bunker a broad variety of vessels. We worked closely with our customers on the specifications of this exciting new bunker vessel and will use cutting-edge technology. Shell is proud to be leading in the development of LNG fuel in shipping.”

Wärtsilä’s advanced dual-fuel technology was first launched in the early 1990s for use in land-based power plant applications. The first marine installation came a decade later. The technology enables the engine to be operated on either natural gas, light fuel oil (LFO), or heavy fuel oil (HFO), and switching between fuels can take place seamlessly during operation, without loss of power or speed. This ensures safety and continuous installation operability. Wärtsilä DF engines are designed to have the same output regardless of the fuel used.

Wärtsilä’s dual-fuel engines provide superior propulsion efficiency, while the clear environmental advantages that operating on gas allows, is another factor in the success of this technology. When operating in gas mode, the nitrogen oxide (NOx) emissions are at least 85 percent below those specified in the current IMO regulations, and CO2 emissions are some 25 percent less than those of a conventional marine engine running on diesel fuel. Additionally, the sulphur oxide (SOx) and particle emissions are negligible at almost zero percent.

In 2014, Wärtsilä’s net sales totalled EUR 4.8 billion with approximately 17, 700 employees. The company has operations in more than 200 locations in nearly 70 countries around the world. Wärtsilä is listed on the NASDAQ OMX Helsinki, Finland.