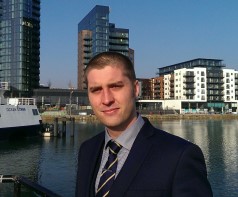 Recruitment specialist ITS Marine’s Managing Director, Alasdair MacMillan, to champion careers in the Merchant Navy at his first Ambassador workshop

Southampton, UK, 11th February 2015 – Maritime recruitment specialist ITS Marine Founder and Manager Director, Alasdair MacMillan, has signed up as a Careers at Sea Ambassador as its newest volunteer.

The role will see Alasdair working in schools, universities and youth groups in his local area to help raise awareness about career opportunities with the UK Merchant Navy.

Alasdair’s first assignment will be delivering a workshop to more than 900 young people at Havant Sixth Form College, Hampshire, at the annual ‘Make Yourself Employable’ event on 20th March 2015.

“It is important that we work harder to fight the growing skills crisis facing the UK maritime sector, which risks losing out on the British talent pool, ” said Alasdair.

“The maritime sector is an excellent career choice with a wealth of options for people who enjoy new challenges and responsibilities. We need to take that message to the wider public.

Careers at Sea is run by the Merchant Navy Training Board (MNTB) and works to encourage young people to take up a career at sea.

As part of his Ambassador activity Alasdair will coach young people on what skills employers are looking for, deliver group seminars and offer one-on-one professional guidance for those seeking to further develop their skillset.

“We are pleased Alasdair has volunteered to be an ambassador. He has considerable expertise in the maritime sector and a great commitment to raising awareness about the wealth of opportunities at sea. He is an inspiration and we are delighted to have him on board, ” said Fena Boyle, Training and Careers Co-ordinator at MNTB.

Alasdair will be taking part in events local to ITS Marine headquarters in Southampton in the coming months and will be working closely alongside education providers and careers advisors.

Intermodal Asia 2015: Hear the Current Trends, See the Latest Products and Do Business