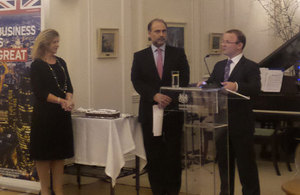 On Monday 16 February 2015, the British Ambassador Mr John Kittmer and the Presidents of the British Hellenic Chamber of Commerce (BHCC) Ms Eugenia Chandris and Mr Harris Ikonomopoulos welcomed guests to their annual joint New Year reception. The reception was a celebration of the strong commercial links between the UK and Greece and provided an excellent opportunity for networking and discussion. In his welcome speech, British Ambassador Mr John Kittmer noted:

Since last year’s reception, Greece has achieved a great many things including a return to growth and UK exports of goods and services have finally increased after many years of contraction. Greece is turning a corner and remains an important market for the UK. We believe that export-driven economies are the way forward and we are working, at European level, for the promotion of a free-trade agenda and completion of the single market, particularly for services and the digital economy. The new European Commission is committed to growth and enterprise and here lies a real possibility for change.

On behalf of the BHCC, Mr Harris Ikonomopoulos said

Today the Chamber is turning seventy and there is no more appropriate venue than this, the former residence of Eleftherios Venizelos, to celebrate this occasion exactly 70 years on.

The British Hellenic Chamber of Commerce

Founded in 1945 the British Hellenic Chamber of Commerce (BHCC) is an independent, autonomous, non-profit organisation, funded solely from membership fees and profits from events and functions. This year’s New Year reception coincided with the 70th anniversary of the establishment of the BHCC which was founded to provide business and investment services to its members and represent their interest both in the UK and Greece.

Based within the British Embassy in Athens, UK Trade and Investment (UKTI) Greece provides in-country support to companies already active in Greece or wishing to expand into the market. It introduces British products and services and helps showcase the very best of what Britain has to offer.