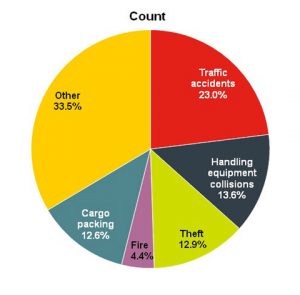 The TT Club is alerting the supply chain industry globally to the stark fact that there is a persistence of claims in a handful of loss types. The leading international transport, freight and logistics insurance provider found that 66% of its claims by number and 62% by value over a five year period can be categorised into just five causes.

The analysis, which was conducted on 7, 000 insurance claims each costing more than USD10, 000 recorded between 2010 and 2014, totalling USD425 million, revealed that the same five generic causes identified in its previous five year analysis continue to disrupt and cost dearly. The TT Club particularly draws attention to the continuing concentration of these causes, rather than the ordering of each individual cause since these proportions can be volatile, especially in terms of headline claim value.

Peregrine Storrs-Fox, Risk Management Director at the TT Club, says, “Risk management and loss prevention initiatives really can be effective in reducing not only losses, but also the largely hidden costs of disruption that ensues. There are many prevention strategies and actions that can be put in place to reduce costs and occurrence of claims, and these should be of paramount importance for the transport industry”.

It is notable that traffic accidents and collisions are significant through the transport industry, firstly outside the port/terminal area, where the cost is USD68 million, but also similar incidents within the port/terminal operations, accounting for a further USD57 million in the statistics. Thus, the entire industry – represented by freight forwarders, logistics operators, container shipping lines, and ports and terminals – are exposed. The detailed causes may be varied, but it is striking that these broad causes dominate. The biggest issues for collisions within cargo handling operations continue to be quay crane boom to ship collisions and overall stack collisions. In these instances, emerging technologies can almost eliminate the risks, particularly where combined with automation. 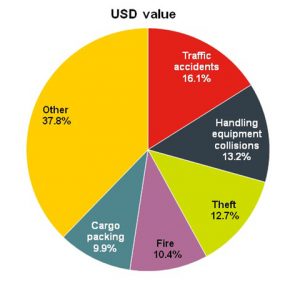 As Peregrine Storrs-Fox expands, “Many traffic incidents and collisions are due to inappropriate speed, but detailed case review frequently demonstrates the impact that effective management culture can have on preventing losses. For example, technology solutions, such as the use of GPS tracking or anti-collision sensors, can only be effective when regularly enforced and integrated into staff management”.

The remainder of the top five causes reflect the old chestnuts of theft, fire and cargo packing, which the TT Club has repeatedly highlighted. Theft accounts for USD54 million, where the most vulnerable part of the supply chain, unsurprisingly, is whilst cargo is in transit, although standard site security measures continue to prove critical to reduce theft. A clear emerging risk is cybercrime as increasingly internet capabilities are used to identify, track and intercept cargo.

Fire is the fourth most costly area, currently accounting for USD44 million, although Peregrine Storrs-Fox comments, “This is a most volatile cost area, as evidenced by the disparity in proportion between the number and value of claims. By its nature fire can be devastating and threaten the very survival of a business. Its volatility in impact in the supply chain, however, relates to the fact that both on board ships and in warehouses there is concentration of value. In both these scenarios the impact of cargo mis-declaration is a real and continuing concern, although a significant number of fires can be traced to design or maintenance issues”. Building fires are mostly caused by electrical faults and mobile equipment fires by hydraulic faults.

Related to some fires, and currently subject of much international focus, was the issue of cargo packing, amounting to USD41 million in the analysis. The TT Club asserts that 65% of cargo damage incidents can be attributed in part to poor or incorrect packing. Peregrine Storrs-Fox adds, “The importance of the industry developing good practice guidance, such as the CTU Code, cannot be under-estimated; the challenge for the supply chain industry is to raise its game in terms of its understanding of good practice and awareness of global requirements”.

Concluding, Peregrine Storrs-Fox said: “Conducting a thorough claim analysis is an essential part of the TT Club’s risk management strategy. Advising the Members on incident prevention strategies and actions that can be put in place to reduce costs and occurrence is of paramount importance.”