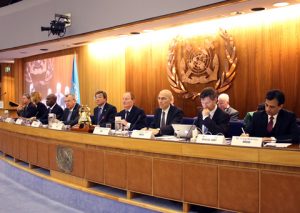 United Nations agencies are meeting in London today (Wednesday, 4 March) to discuss concerted ways to address the high numbers of lives being lost at sea in unsafe craft, particularly in the Mediterranean Sea, where hundreds of people are reported to have died in recent weeks alone on dangerous and unregulated sea passages.

The High-Level Meeting to Address Unsafe Mixed Migration by Sea is being hosted at the International Maritime Organization (IMO) Headquarters in London and aims to facilitate dialogue and promote enhanced cooperation and harmonization between United Nations agencies, international organizations, non-governmental organizations, Governments and the shipping industry.
It has been agreed that a mechanism will be established, to enhance inter-agency communication with respect to the maritime aspects of mixed migration. The meeting is also discussing joint projects, for example, the establishment of joint databases to share and collate information and statistics on irregular movements and suspect vessels; quantifying the effects of irregular and unsafe crossings on the shipping industry; and improving maritime situational awareness.
IMO Secretary-General Koji Sekimizu said that the issue of mixed migration by sea, including irregular migration, had, in recent years, reached epidemic proportions, to the extent where the whole system for coping with such migrants was being stretched up to, and sometimes beyond, its breaking point.
History has shown that migrants contribute to economic growth and human development in both home and host countries and can enrich societies by bringing cultural diversity. However, the sheer size and scale of situation in Europe and elsewhere today is threatening to jeopardise long-established humanitarian principles surrounding search and rescue and the treatment of people rescued from the sea. In 2014, more than 200, 000 people were rescued and more than 3, 000 people are reported to have died in unsafe, irregular and illegal sea passages on the Mediterranean alone.
Mr Sekimizu said, “Coast guards, navies and the rescue infrastructure as a whole are all being stretched to breaking point. They have barely been able to deal with the tidal wave of people needing to be picked up from the sea; and it must never be forgotten that the strenuous efforts they make to rescue the thousands of persons in distress come at the price of great risk to themselves and at considerable cost to their countries.”
Mr Sekimizu referred to the severe problems reported by Italy and Malta, in particular, in their ability to cope with the on-shore processing of the large numbers of undocumented migrants who reach their shores. “Nonetheless, ” he added, “they continue rendering their services (deeply humanitarian in their very essence) and, in the process, have rescued thousands of such persons – an outcome that has earned them the appreciation of the community as a whole.”  He also drew attention to the more than 650 merchant ships that had been diverted from their routes to rescue persons at sea last year and the consequent detrimental effect on the shipping industry, trade, the economy and the global supply chain.
“I firmly believe that there is scope for greater efforts by coastal States of departure to better manage the process of migration and to reduce the numbers of unsafe craft undertaking sea voyages.  This could include taking action against smugglers involved in facilitating the travel of migrants by sea on board unseaworthy craft; and the more effective application of measures to enhance maritime safety and security in general, ” Mr. Sekimizu said.
He added that there was a need, in collaboration with Member States concerned, to strive to develop a mechanism whereby migration was managed and sustainable and to find alternative safe ways so that people were not driven to making dangerous voyages on unsafe craft.
He acknowledged that if some mixed migrants did take to sea, which may be inevitable, then a robust mechanism for rescue should be in place to protect and save lives, and deal with them in a legal, humanitarian and sustainable manner.  “In this context, I must say that more efforts by all nations bordering the Mediterranean and the European States would be highly appreciated, ” Mr Sekimizu said.
Participating in the meeting are senior representatives of the International Maritime Organization (IMO), the United Nations High Commissioner for Refugees (UNHCR), the United Nations Office on Drugs and Crime (UNODC) and the Office of the United Nations High Commissioner for Human Rights (OHCHR), United Nations Development Programme (UNDP), the United Nations Division of Ocean Affairs and the Law of the Sea, the International Organization for Migration (IOM), and Interpol.
Also attending are Government representatives from a number of countries, including those directly impacted by the crisis, as well as delegations from international non-Governmental organizations including the International Chamber of Shipping (ICS).
The high-level inter-agency meeting will continue on Wednesday afternoon and through Thursday with technical meetings to develop a way forward, building on the momentum gained at the UN High Commissioner for Refugees’ Dialogue on Protection Challenges held in Geneva on 10-11 December 2014.
IMO is the UN agency with responsibility for safety at sea, and for the legal framework surrounding search and rescue and the long-standing obligation of merchant vessels to go to the rescue of people in distress at sea.
___________
Links:
UNHCR, IOM, IMO, UNODC and OHCHR Joint Statement on Protection at Sea in the Twenty-First Century (10 December 2014)
Rescue at Sea: A guide to principles and practice as applied to refugees and migrants
Global Migration Group