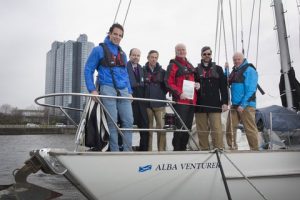 A stellar cast of tourism-related MSPs and CEOs took part in the formal launch of the Scottish Marine Tourism Strategy, held in Glasgow’s Clyde-side Crowne Plaza Hotel on Thursday 5 March 2015.

Chaired by Stuart McMillan MSP, over 100 invited guests from tourism and marine user groups heard how an ambitious new strategy to ‘Awaken the Giant’ of Scotland’s marine tourism sector would bring even more visitors to the ‘biggest coastline in Europe.’

The five-year plan, brought together by prominent stakeholders and led by BMF Scotland (BMFS), was launched by Tourism Minister Fergus Ewing and ocean adventurer Mark Beaumont.

The strategy aims to boost Scotland’s reputation as a world class marine tourism destination by improving the facilities for visitors, building skills within the sector and promoting events for racing and cruising in Scottish waters.

The Strategy, the first of its kind, has its roots in the Scottish Boating Alliance which was later integrated with the Cross Party Group for Recreational Boating and Marine Tourism, chaired at Holyrood by Stuart McMillan and from the group’s first Symposium held two years ago, the need for a Marine Tourism Strategy became apparent.

The board of British Marine Federation Scotland took the leading role under the banner of ‘Awakening the Giant’ to generate greater visitor expenditure which directly supports 3, 000 jobs in the sector.

BMFS chairman Simon Limb said, ‘This strategy creates a framework and a path for growth and is relevant to all marine and coastal businesses.’

The next stage in developing the new Strategy will be the launch of the Action Plan in the autumn of this year, before the second Holyrood Symposium due to be held in late autumn.

The British Marine Federation has over 1, 500 members, representing an industry worth £2.93 billion that employing almost 31, 500 people in the UK. Members are drawn from both the seagoing and inland sectors of the marine industry covering the leisure boat, hire fleet, commercial workboat and superyacht categories and supporting services. For more information about the work of the BMF and how to join, please visit the website athttp://www.britishmarine.co.uk/

BMF Scotland aims to feed back information relevant to the business environment and development of members in Scotland, to BMF, to enable appropriate action and support. This local regional focus on Scottish businesses and their local business environments is vital, given Scotland’s geography, coastline and devolved government status.