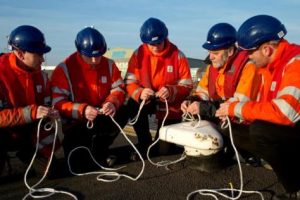 Associated British Ports (ABP) has launched its search for the next generation of marine apprentices during 2015’s National Apprenticeship Week.

The Marine Operations Apprenticeship scheme, which is the only one of its kind in the country, it is based around the National Occupational Standards for Port Operations and is designed to give those interested in working in a marine environment the opportunity to learn about shipping and port operations, while working for the UK’s leading port operator.

The scheme was developed by ABP Marine Training Manager Martin Gough in 2012 when he identified a need to bring young people into the industry and train them to a high standard.

“It’s essential that we have robust succession planning in place and part of that process means we need very high-calibre young people coming into the business to ensure it continues to operate to the highest marine standards, ” he said.

“The course is designed to give hands-on training in all aspects of our port’s marine operations and offers exciting career opportunities, which can lead to the highest levels within the operational teams that control shipping movements at ABP’s 21 ports.”

The company currently employs 10 marine apprentices, five of which were appointed in 2012 and are now embarking on the Professional Diploma in Shipping and Maritime Studies, a bespoke award created especially for the ABP Marine Operations Apprenticeship. The remaining five recruits were appointed last year and are settling into their new roles.

Martin Gough continued: “As the supply of experienced mariners wanting to come ashore to train as pilots is decreasing we’ve decided to extend our Marine Operations apprenticeship scheme to create a Marine Pilotage Apprenticeship.

“The Marine Pilotage Apprenticeship will take a total of five years to complete, being an additional two years on top of the first three years of the Marine Operations Apprenticeship.

“The training for the Marine Operations Apprenticeship is based at the Humber ports however, the entire second year of the apprenticeship is spent at South Tyneside Nautical college to gain an SQA approved Professional Diploma in Shipping & Maritime Studies. The Pilotage apprenticeship scheme will be based in our South Wales ports.

If you’d like to find out more about ABP’s Marine Apprenticeship and Marine Pilotage Apprenticeship schemes the company will be hosting a number of presentations across the UK: