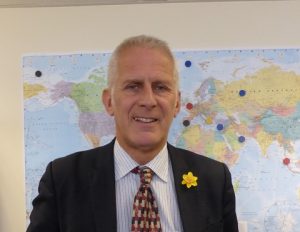 With ‘Opportunities to Work at Sea’ as the theme for this year’s Seafarers Awareness Week (20-28 June), it is hoped that the week will not only raise awareness of the UK’s dependence on seafarers, but also highlight the many career prospects the maritime world offers young people.

During a recent visit to Milton Keynes, the UK Shadow Transport Minister, Gordon Marsden MP, pledged his support for Seafarers Awareness Week saying, “I think Seafarers Awareness Week is a fantastic opportunity to offer a window on something that has not only been very important in our past, but also is key to Britain’s future. Lots of people do not know the sheer variety of activities that go on at sea, they don’t necessarily know how dependent we are on the trade that comes by sea, both in and out of the country, and perhaps, particularly for young people, they don’t understand that there are some fantastic jobs to be had at sea too. Careers can be anything from very high-tech engineering on oil platforms out at sea, to having some wonderful opportunities in terms of hospitality on cruise ships – these can be long-term careers for both men and women. The latter point is something that really needs to be emphasised, because there are other industries that have been traditionally male dominated where more women have come into the workforce, and something like Seafarers Awareness Week is a great opportunity to take that forward too.

“I’m absolutely delighted to endorse Seafarers Awareness Week; coming at a time when we are seeing quite a significant expansion in world shipping – very significant opportunities arising particularly from SE Asia expanding their fleets – it’s really important that UK PLC can get a share of that. It’s also really important that the Department for Transport, and the various agencies, have a real policy for skills because, actually, skills are not things you can build in a day, or even a year. We know already that we have a potential skills gap building up if we don’t do some really significant things now. We need to look at ways in which Government can work, across the sector, with all the commercial organisations, to expand the opportunities for people to take on skills at all levels in the shipping fleet.

Seafarers Awareness Week is coordinated and promoted by the charity Seafarers UK for the UK’s maritime community – Websitewww.seafarersweek.uk

WISTA-UK congratulates the 2014 International Personality of the Year, Entrepreneur of 2015 and ‘Came by SHIP’ winners at the IMO