Addressing more than 450 leading marine professionals from around the world at the IMarEST’s Annual Dinner at London’s Guildhall on Friday 13th March, Mr Murphy also called on guests to promote the marine industry within companies, universities, colleges and schools.

Speaking of his appointment, Mr Murphy said, “It is a real privilege to have been appointed as President of this highly respected Institute. I look forward to contributing to IMarEST’s mission to support the development of future and current marine professionals and to promote the scientific development of marine engineering, science and technology.” 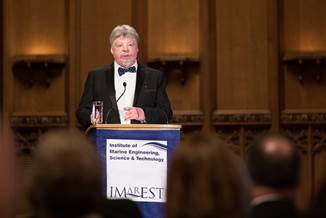 Formerly an Engineering Officer in the Royal Navy, Mr Murphy has also held senior management positions in corporate engineering OEM companies. As MD of Tidal Energy Ltd, he has brought his significant marine industry awareness to the development of the company’s patented tidal stream DeltaStream device, which is due to be deployed this Spring in Pembrokeshire. It will be amongst the world’s first demonstration devices to generate green, sustainable and predictable tidal power.

The Annual Dinner saw Falkland’s War veteran Simon Weston OBE deliver an inspiring after-dinner speech at the event which was sponsored by Lloyd’s Register, Harris Pye, and supported by Metalock Engineering and the Science Council.

The IMarEST President, also presented Tom Mackey, Founder and Co-Chair of IMarEST’s Ballast Water Management Special Interest Group, with the Institute’s prestigious President’s Commendation Award; there can be only 25 Honorary Vice-Presidents at any given time.

In praising Mr Mackey’s career, Mr Murphy said: “He has been a Fellow of the Institute since 1989, served as Chairman of the World Maritime Technology Conference for SNAME in 2003 and was a staunch supporter of the same event  in London in 2006 when organised by IMarEST.  He is also the Founder and past Chairman of the World Maritime Technology Congress on which he continues as a member.

“As Founder Co-Chair of IMarEST’s Ballast Water Management Special Interest Group, he has provided the technical inspiration and leadership behind the series of IMarEST Ballast Water Management conferences. He also represents the Institute at IMO Committee meetings and remains a key facilitator of IMarEST’s continuing liaison with SNAME and strongly advocates a close partnership between the two organisations.”

2015 marks the 126th anniversary of the IMarEST which, with nearly 16, 000 members made up of marine professionals from more than 120 countries, is the largest organisation of its type in the world.

The dinner also raised over £1400 for its charitable wing, The Guild of Benevolence, which originated from the Fund set up in 1912 by the Institute, in co-operation with the Daily Chronicle, to help families of the engineer officers lost when the RMS Titanic sank on 15 April 1912, and continues to support maritime professionals and their families.

A video of the event can be watched at: https://www.youtube.com/watch?v=E9sPZct7JPg

The IMarEST is an international membership body and learned society for all marine professionals. It is the first Institute to bring together marine engineers, marine scientists and marine technologists into one international multi-disciplinary professional body. It is the largest marine organisation of its kind with a worldwide membership of nearly 16, 000 based in over 120 countries.

The IMarEST is a respected authority in every maritime country. It is a Non-Governmental Organisation with consultative status at the International Maritime Organization (IMO), observer status at the Intergovernmental Oceanographic Commission and International Hydrographic Organization (IHO), and it has special consultative status with the Economic and Social Council of the United Nations (ECOSOC), which facilitates its access to other international  intergovernmental meetings where its specialised marine expertise is of particular use, e.g., the United Nations meetings on Areas Beyond National Jurisdiction, the Intergovernmental Panel on Climate Change (IPCC) and the work of the International Seabed Authority on marine mining. It is a nominated and licensed body of the Engineering Council (UK), a member of the Science Council and has significant links with many other maritime organisations worldwide.

IMarEST runs a series of industry leading and technically excellent events and conferences as well as publishing the internationally recognised publication,  The Marine Professional.