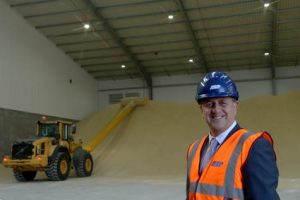 A new warehouse with a range of environmental features has been built at Associated British Ports’ (ABP) Port of Immingham in order to provide increased storage space for the wide range of customers that use the port for bulk cargoes.

The building, which represents an investment of £2.3 million, forms part of ABP’s strategy to provide increased and improved bulk storage to meet customer needs and increasing demand.

The warehouse has taken just six months to build and offers an additional 3, 600 m2 of high-quality bulk storage, which is split into two 1, 800 m2 bays. It also benefits from a number of features which will help ABP meet its environmental and efficiency targets.

The southern roof features a solar array, which will be used to generate around 156, 000 kilowatt hours (kWh) of electricity per year. This will be used to power the building and any excess electricity will be utilised elsewhere on the port estate. The power generated by the array equates to a CO₂ saving of over 85, 000 kg each year.

LED lighting has also been used throughout the building to help to cut down on light pollution and costs. State-of-the-art carbon monoxide and fire monitoring equipment has also been installed, along with ventilation cowls, fast-acting doors and flood-resistant personnel doors.

Head of Operations at the Port of Grimsby & Immingham Steve Williams explains how the new warehouse will benefit the business.

“Our bulk cargoes business is growing and we needed to provide additional storage space to accommodate that increasing demand, ” said Steve. “Our engineers worked with the contractor, Topcon Construction Ltd, to develop a building that would offer a range of benefits as well as the space required to service our customers, so we can increase efficiency and productivity, while meeting our environmental targets.

“Providing additional infrastructure in a sustainable way demonstrates ABP’s commitment to supporting the economic development of the region, whilst ensuring that development is managed in a way that minimises any impact on our neighbours.”