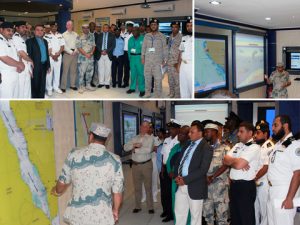 02/04/2015 All 24 students from 14 signatory countries to the Djibouti Code of Conduct have completed the Maritime Law Enforcement course held at the Border Guards Maritime Institute in Jeddah, which was conducted under the auspices of the Djibouti Code of Conduct (DCoC) and the Djibouti Regional Training Centre with the support and joint supervision of the IMO Secretariat’s Kiruja Micheni, and the Border Guard’s Captain Jebreel Al-Hazmi.

The closing ceremony for the course was timed to coincide with a graduation ceremony for 1, 600 Border Guard officers. Speaking on behalf of IMO Secretary-General Sekimizu, Chris Trelawny, Special Adviser to the IMO Secretary-General on Maritime Security and Facilitation, said that the course was an excellent example of the multi-disciplinary, multi-agency approach necessary for long-term stability and sustainability, with the coming together of civil/military cooperation, IMO working in partnership with the Kingdom of Saudi Arabia, NATO, and the European Union, for the benefit of all signatory States (to the Djibouti Code of Conduct), in a state-of-the-art training centre.

The course covered internationally-recognised best practices for planning and conduct of law enforcement operations at sea, from a regional perspective and includes theory and practice in planning and ex-ecution of maritime law enforcement using simulators, with instruction delivered by trainers from Saudi Arabia, the NATO Maritime Interdiction Operations Training Centre (NMIOTC), and the EU MARSIC Project. ​