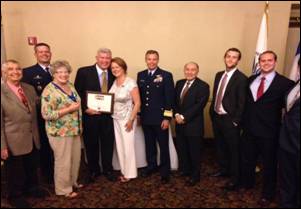 The presentation was made at a joint meeting of the Propeller Club of Jacksonville and the Navy League. Cavaliere cited Thomas’ participation in numerous charitable organizations, including the Juvenile Diabetes Research Foundation and American Diabetes Foundation, through his position as chief operating officer at Solutions Through Advanced Research, Inc. (STAR), a Jacksonville company active in pharmaceutical research and clinical trials. Thomas has also consistently provided support and interim funding to small businesses in the maritime industry.

The Legion of Honor Award publicly recognizes and honors outstanding members of society whose lives model the giving spirit and unconditional service to community, nation, and humanity without regard to race, religion or creed exemplified so dramatically by the Four Chaplains. To be considered for any of the five awards, the selfless and transformative achievement must be above and beyond that of a professional resume or organizational position.

Thomas explained, “I am deeply humbled and appreciative of this recognition and accept this for my entire family as appreciation for their ongoing compassion and generosity. I extend a special recognition and thanks to my wife, Lisa, and her sacrifices each day in operating our research organization bringing leading edge pharmaceutical products and our areas’ finest physicians to those in need at no cost. I ask that everyone open their hearts, their pocketbooks and wallets, and their schedules to volunteer and support the charitable organization of their choice and the Four Chaplains Memorial Foundation atwww.fourchaplains.org.”

About the Four Chaplains Memorial Foundation

The Four Chaplains Memorial Foundation’s vision is to impart the principles of selfless service to humanity without regard to race, creed, ethnicity or religious beliefs. It was founded in 1951 and draws its name from the four U.S. Army chaplains who gave up their life jackets and prayed together when their transport ship, the U.S.A.T. Dorchester was torpedoed 80 miles south of Greenland on Feb. 3, 1943. The Chaplains came from different faiths and backgrounds. John P. Washington was a Catholic priest from Kearny, N.J.; Rabbi Alexander D. Goode was a native of York, Pa.; Clark V. Poling was a minister at the First Reformed Church in Schenectady, N.Y.; George L. Fox, a decorated World War I veteran, was a Methodist minister in Gilman, Vt.

In 2011 the Helix Alliance was formed as a sales and marketing group catering to smaller businesses that desired an interim outsource solution for their company. The economic environment, competitive nature of the marine business, and costs associated with domestic and international business travel made our proposition very attractive to a growing company. Our fixed-fee, full-service solution offers the busy entrepreneur a trained and experienced sales team, a networked marketing department, along with a team of professional logisticians and competent technical support personnel eager to support the profitable growth and success so well deserved.