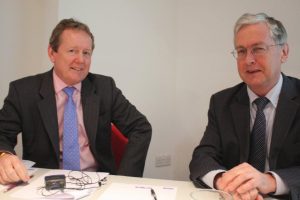 Who – shipowner or insurer – should bear the costs of any action taken to prevent a stricken vessel from getting into further costly difficulties? A seminar organised jointly by the Association of Average Adjusters and the International Underwriting Association heard that the market had long wrestled with the arguments, and that considerable uncertainties remain.

The London event was given an outline of the main provisions of what could count as ‘sue and labour’ – a clause in marine policies under which the assured can recover reasonable expenses for minimising or averting an insured loss.

Two former chairmen of the Association of Average Adjusters, Keith Jones and Richard Cornah, updated the packed meeting on the implications of recent cases (which may yet be subject to appeal) where very large sums were at stake.  The Association entitled the event Still Totally Lost – in a reference both to the term “constructive total loss” (CTL), and the uncertainties that may follow.  A CTL arises when the ship is so damaged by insured perils that the cost of recovery and repair exceeds the insured value.

Mr Jones, of broking group Aon, reminded the audience that where the assured opts for a CTL he must give notice of abandonment to insurers; otherwise the loss can only be treated as partial. Under the standard clauses, underwriters will pay a proportion of expenses (in excess of proceeds) reasonably incurred in saving or attempting to save the vessel and other property. General Average and salvage charges are not recoverable as sue and labour.

Reviewing much deliberation by English courts on the issues, Mr Cornah said that the upshot was that “pretty well anything can be considered ‘sue and labour’ according to the circumstances.” Especially important though was the question of the timing of the procedural steps.  Cases he cited supported the principle that sue and labour can extend to preserving residual value in the vessel if it is to the benefit of underwriters. Nothing was excluded, but there had to be potential benefit to insurers.

Mr Cornah, who is chairman of Richards Hogg Lindley, cited the case of the “B Atlantic”. In August 2007, the vessel was detained in Venezuela and the crew arrested after drugs were found attached to the hull. In October that year, the master was sent for trial and detention of the vessel confirmed. In June 2008 notice of abandonment was served, and underwriters responded with a “writ clause.” The ship was declared a CTL six months after the seizure, in accordance with the special detention clause in the policy.

Much legal expense was incurred in attempting to release the vessel and crew, and there were crew wages and other vessel running expenses to be paid. Insurers said that the right of the assured to recover sue and labour expenses ceased on the date of the first notice of abandonment by virtue of the agreed “writ clause.” They also argued that the legal costs were not sue and labour because they were incurred both for the release of the vessel and the defence of the crew. An English judge disagreed with that reasoning on the basis of previous case law and on the grounds that the release of the crew would have facilitated the release of the vessel. The court characterised trying to make the best of the situation as sue and labour.

How could wages be allowed as sue and labour if the assured was under a contractual obligation to man the vessel? In fact, it was held by the court that the cost of full manning should be allowed because the vessel had to be ready to sail if the detention were suddenly lifted, although the notional cost of providing a skeleton crew should be for owners’ account.

Mr Cornah went on to look at the case of the suezmax tanker “Brillante Virtuoso”, which in 2011 was attacked by pirates off Aden and ordered to sail to Somalia. There was an explosion and fire in the engine room and the pirates left. The ship was towed to Khor Fakkan under a Lloyd’s Open Form contract and was subsequently attended by two tugs on standby until it was sold for scrap.

The owner did not lose the right to claim a CTL by selling the vessel, said the judge in the case, and the standby tugs counted as sue and labour. Any accident such as the vessel running aground or collision could have resulted in the ship becoming an actual total loss or sustaining damage which would have affected its residual value. The judge affirmed that sue and labour could extend to preserving the residual value of a ship if that was to the benefit of the insurers.

The judgment in this case is also to be recommended, said Mr Cornah, for its detailed analysis of estimated repair costs.  The approach the court took was that you had to look at the situation in the round, and not just the numbers – and if necessary add quite a large margin to the numbers.

Mr Cornah referred to three phases in handling a casualty. Attempting to prevent a CTL clearly gave rise to sue and labour; if this were unsuccessful, attempting to preserve value could also qualify if there were potential benefit to insurers; if the worst happened, wreck removal brought the situation into the territory of protection and indemnity cover. One of the things that often remained unclear was the transition point between safeguarding residual value and a wreck removal operation: on this question, hull underwriters needed an ‘exit strategy.’ –

For further information, please contact the Association’s secretariat at