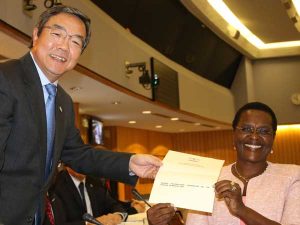 14/04/2015 Kenya has ratified the Nairobi International Convention on the Removal of Wrecks. Ms Nancy Karigithu, Director General, Kenya Maritime Authority, handed over the instrument of ratification to IMO Secretary-General Koji Sekimizu at the opening of the Legal Committee’s 102nd session, on the day the Convention entered into force ​internationally (14 April). ​​The Convention will enter into force for Kenya in three months’ time. ​