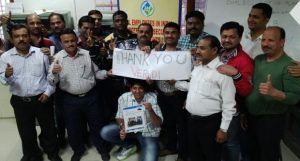 The ITF has sent a message urging affiliates in its global DHL network to act in support of DHL India activists and their union in their struggle against management’s anti-union and anti-worker onslaught.

15/04/2015
The urgent plea followed news from unions that a meeting with management on 10 April achieved no progress and that it believed the company was simply going through the motions without showing a true willingness to negotiate.

Ingo Marowsky, ITF global head – supply chain and logistics, recently visited India to participate in the unions’ meeting to plan their next steps. On arrival, he was greeted by news of 26 injunctions served against the activists and their union.

In his message to ITF affiliates on 13 April, Marowsky said: “These injunctions are designed to muzzle workers and their union. The union is fighting all 26 injunctions and it is clear, however, that they cannot do this on their own.”

He asks affiliates to raise awareness with their activists, local management and local media about the situation India, by circulating the recently-launched, ITF-commissioned report by acclaimed US academic John Logan which unveils serious breaches of domestic and international labour standards.

He asks unions to contribute to the DHL India solidarity fund. “There is an imminent need for financial support for the court proceedings. ITF has committed emergency funding and the union’s resources are protected. But the strongest signal our network can send is that of direct support. We are aware of the fact that this is an unusual appeal and you may need to speak with your senior leadership about this.”

Twenty-two trade unionists from Mumbai, Delhi, Chennai, Kolkata, Jaipur and Pune converged on New Delhi for the planning meeting from 13-15 March. They analysed the effectiveness of the campaign to date and developed a plan to win union rights and recognition for DHL employees in India, leading to a negotiated collective agreement regulating wages and work conditions.