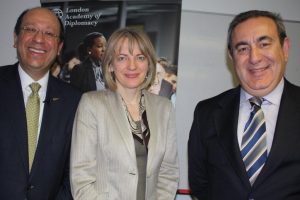 Exploitation of hydrocarbons around the shores of Cyprus can be the game-changer in ensuring a stable and secure future for the island, Cypriot High Commissioner Euripides Evriviades has emphasised in London.

Addressing a Diplomatic Forum event of the London Academy of Diplomacy, Mr Evriviades spoke of the “overlapping interests” with nearby countries over natural resources.  He declared: “Natural gas can become to the countries of the eastern Mediterranean what coal and steel was to the European Steel and Coal Community [fore-runner of the European Union] after World War II. It can mean closer co-operation with other like-minded countries such as Egypt, Israel, Lebanon and Palestine.” He did not exclude Turkey after a hoped-for solution to the Cyprus question. The eastern Mediterranean was a region in turmoil and flux, he noted.

As the High Commissioner was speaking,  Egyptian President Abdel Fattah al-Sisi accompanied by his ministers for petroleum, foreign affairs and investment were in Nicosia for a meeting with President Nicos Anastasiades and Greek Prime Minister Alexis Tsipras.

The High Commissioner echoed remarks of President Anastasiades that the discovery of hydrocarbon reserves in the Levantine Basin has changed the geopolitical context of the region. Joint exploitation of these resources could alleviate some of the security dilemmas faced by almost every country, said Mr Evriviades.

A consortium of Italian company ENI and South Korea’s Kogas is drilling for gas in what Cyprus terms its exclusive economic zone, the boundaries of which are challenged by Turkey.

Successful drilling results could offer a positive incentive for the resolution of the Cypriot question, and Cyprus could gain political leverage in the EU as an alternative gas supplier for the European market. The EU produces just under half of its own energy needs and imports the rest mainly from Russia, Norway and Algeria.

Mr Evriviades categorised the accession of Cyprus to the EU in 2004 as the single most important strategic development in the country’s history since independence in 1960.  It affirmed Cyprus’s place in Europe and its importance in the security of the eastern Mediterranean, thereby proving to be “a win-win development, for the island and for the region.” He said: “By virtue of EU membership, there is a paradigm shift.  Cypriots cannot remain prisoners of the past.” Its future and survivability lay in the EU.

The High Commissioner welcomed the recent election of Mustafa Akıncı as new leader of the Turkish Cypriot community. This boded well for the difficult and interrupted negotiation process conducted under the auspices of United Nations special adviser Espen Barth Eide. He praised Mr Akıncı as a courageous man with a good track record on rapprochement and reconciliation. Mr Eide was due in the island and talks were about to take place.

(Voters in the Turkish-controlled area in late April elected Mr Akıncı as their president, giving him 60.3% of the vote against a “hardliner.”)

Mr Akıncı has said that he wants agreement to relieve trade and tourism bottlenecks by opening Famagusta port to direct trade and Ercan Airport to direct flights. He also wants to reopen the abandoned “ghost resort” of Varosha, once the playground of celebrities and the wealthy. 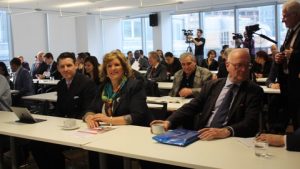 Talking of efforts to revive the stalled peace talks, the envoy said: “We come back to square one.  Turkey holds the key to the solution.” Turkish president Recep Tayyip Erdoğan had chided Mr Akıncı over his view of the relationship between Turkey and Northern Cyprus, insisting: “For Turkey, Northern Cyprus is our baby. We will continue to look at it the way a mother looks at her baby.”

The High Commissioner was also alarmed by a book in which Turkish prime minister Ahmet Davutoğlu said that Cyprus was in Turkey’s “vital space.” The envoy said that those words “send chills up my spine, and any European should get chills up his or her spine.  This is ‘Lebensraum’ again, and we know what that brought us.”

Despite those statements and Turkish ‘gunboat diplomacy, ’ the envoy said, “we have to keep trying [to resolve the 40-year division of Cyprus]. We cannot give up. The stars are more aligned this time, because the situation is unsustainable and… time is not on anybody’s side.”

Mr Evriviades referred to Turkey’s issue of a Navtex (navigational warning) under which the Barbaros Hayreddin Pasa,  a seismic vessel owned by a Turkish oil company, would carry out survey offshore southern Cyprus. President Anastasiades had in October suspended talks with the Turkish side, accusing it of violating sovereignty by the deployment, and saying that the natural resources belonged to the people of Cyprus. Turkey had issued a first Navtex in October for the seismic vessel from October 20 to December 30, and the second Navtex expired at the end of April.

“The status quo in Cyprus remains unacceptable, ” declared Mr Evriviades.  “Historical divisions have always been the source of instability and conflict: Vietnam, Yemen, Ireland, Germany.” He added: “Peace is not the absence of war.  People say, you have peace in Cyprus. My answer is: you also have peace in cemeteries.” He warned: “The structure of a solution is strategically very important.  It matters not only to Cyprus, but to countries in the region, the EU including the UK, and the international community.”

During questions, Mr Evriviades was asked about illegal Russian funds being channelled through Cyprus. He replied: “The Russian mafia – they are everywhere.  We should go after everybody.  This money laundering is a financial scourge.” He assured the questioner: “We have put a lot of our house in order.”

Prof Joseph Mifsud, director of the London Academy of Diplomacy, introduced Mr Evriviades, outlining his extensive diplomatic career, support for professional development and education, and knowledge of subjects including maritime matters and the Law of the Sea. Mr Evriviades “is one of the great ambassadors of the EU here in London, ” said Prof Mifsud.

London Academy of Diplomacy, in partnership with the University of Stirling, offers specialised courses in diplomacy, security studies and international business and trade. The academy runs the first taught doctorate in diplomacy, under senior lecturer Dr Deborah Swallow, who coordinates the Diplomatic Forum events.