Port regulation: ESPO sees room for a realistic compromise between Council and Parliament 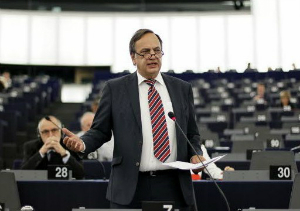 Brussels,  4 May 2015 – Tomorrow, EP’s Transport Committee (TRAN) will hold a first debate on the Port Regulation proposal of May 2013. In March 2014, the EP rapporteur, Knut Fleckenstein (picture) and the main EP negotiators decided for different reasons not to vote on the proposal before the elections but to leave it to the new Parliament to pick up the thread. In the meantime, the Transport Council reached a political agreement.

The European Sea Ports Organisation (ESPO) asks the rapporteur and the new Transport Committee, when considering the proposal,  to fully take account of the substantial progress made by the Council on different issues:

However, European seaports count on the Rapporteur and on the Parliament to strengthen the Council deal on one important issue: the autonomy of the port to set its own charges.

For European ports, developing their own charging policy is one of the main tools of nowadays port management. This autonomy principle has been put forward in the Commission proposal of 23 May 2013. This principle was further strengthened in the compromise amendments which were on the table before the EP elections. The Council however watered down the principle of autonomy by giving Member States the option to either give ports (more) autonomy on the issue or to leave it to the national policy to define the port charges. European ports fear that this subsidiarity approach will further undermine the level playing field between European ports.

In general, ESPO hopes that Parliament pursues the constructive debate that started last year and believes that all elements for a workable Regulation are either on the Council or the Parliament table.

“We believe that so far both the Council and the Rapporteur, supported by the main negotiators have put a lot of effort in improving the Commission proposal. Strengthening the autonomy of ports, both when it comes to setting their own charges and defining the minimum quality level for their service providers, are however essential conditions for us. We hope that the rapporteur and the new Parliament continue to support us in that sense. We are looking forward to restarting the discussion with Parliament, Council and Commission as well as with all other stakeholders in view of having a Port Regulation that benefits every single port in Europe.” says ESPO Secretary General Isabelle Ryckbost.

Since the publication of the Commission proposal in 2013, ESPO members have expressed their support for a legislative framework that:

At the same time,  ESPO would oppose a framework that:

The ESPO position on the draft Regulation proposal can be found here.