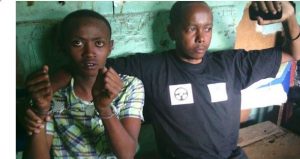 07 May 2015 – The ITF is helping two informal sector union officials who were wrongfully arrested and detained in Nairobi, Kenya.

Joseph Ndiritu, chair, and Mwangi Wanjoya, organiser, of the ITF-affiliated Public Transport Operators Union (Puton) were arrested on 24 April for the illegal collection of funds, when in fact they were simply carrying out the normal collection of union dues. They were detained for over six hours without any criminal statement being taken and no formal charges being made.

The ITF advised the two men on how to conduct themselves while in police custody and persuaded the assistant labour commissioner, P N Macharia, to intervene. He contacted the police officer in charge and explained that the officials’ actions were legitimate under Kenya’s new labour laws introduced in 2007. As a result, the men were released.

Puton officials expressed concern that the police’s limited legal knowledge made them concentrate on victimising citizens rather than facilitating constitutional rights such as freedom of association and collective bargaining.

Puton general secretary Mbuthia Gakere said: “We held a meeting with our members last month in which we agreed to collect dues at the parking points of the mini-bus operators. However, the police simply arrested Joseph and Mwangi as criminals. We managed to prove the legitimacy of our union and its officials and this is when they were released. We are grateful to the ITF for its support during his time.”

ITF Africa regional secretary Joseph Katende commented that there were soaring cases of Kenyan police being used against trade unions and that the country’s transport workers were not benefitting from the mandate of the police, which was to keep law and order. He said that for harmonious labour relations to work, employers should foster favourable working conditions so that the police were not required.