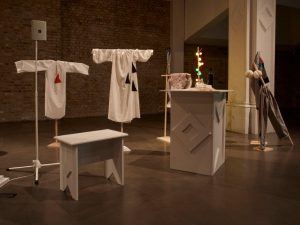 Winner of the fifth edition of the Max Mara Art Prize for Women, established in 2005 to promote and support women artists in the UK, is Glasgow-based Corin Sworn. She was awarded the prize for her work celebrating theCommedia dell’Arte, which were improvised plays originating in street theatre in Italy in the 1550s.

Her new installation at London’s Whitechapel Art Gallery evokes the characters and tales which influenced some of the world’s greatest artists and writers, from Shakespeare and Marlowe to Goya and Picasso.

The prize offered by Max Mara – a group founded in 1951 by Achille Maramotti and now one of the largest companies in the world for women’s ready to wear clothes – consists of an artistic residency, and an exhibition at the Whitechapel. Corin spent her six-month residency immersing herself in the cultures of Rome, Venice and Naples – and was surprised to learn from Neapolitans that their city was older than Rome, and of Greek origin! 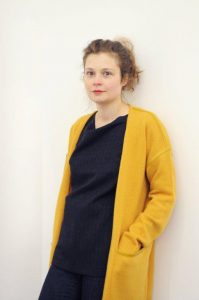 Whitechapel curator Daniel Herrmann said that the prize provided the conditions for artistic work that might not otherwise be possible. The era of popular vernacular drama explored by Corin was one of shifting notions of identity in Renaissance Europe, and in her exhibition – which consists of a film narration featuring acrobats and dancers, and stage props, costume and other theatre paraphernalia – this is echoed, with modern twists.

Corin says that she is not trying to recreate the past, but play with her reading of some aspects of the past.

All the same, she diligently searched public libraries for contemporary accounts and details of costumes. In fact few traces had survived of an art form that was rarely written down. Lack of copyright led playwrights to guard their scripts jealously. Corin did discover, though, a 16th century list of props kept by one of the travelling troupes, and scenarios by Flaminio Scala, an actor and manager of one of the leading companies.

She used this as a starting point to design objects herself, and worked with Max Mara fashion specialists and tailors at the company’s headquarters at Reggio Emilla to produce them. 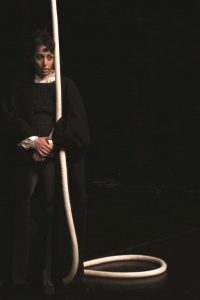 The notion of such objects as imposters, as are the actors, is at the heart of this conception. Mistaken identity was a frequent theme in performances. A woman might on stage be dressed as a man, a master as a servant or a lord as a beggar, undermining fixed ideas of gender and rank. Expressions and gestures were grossly exaggerated, and all this hinted at a questioning of social freedoms and brought out anxieties around social instability.

The Commedia dell’Arte was a powerful force.  In an interview in the exhibition catalogue, Corin says: “I was interested in how this Italian-based form of migratory theatre was able to travel through Europe successfully crossing lingual barriers when, as a form of art, it was so language reliant.  How could it be successful in communities that did not necessarily speak the same language as was used on stage?”

It was an actor-led form of art, she says, and actors and actresses would collect lines, gags, stunts and gestures that they could reshuffle as needed. Many of the famous female actors were renowned for their quick wit, but as oral traditions dwindled and scripts began to be committed to wiring, mostly by men, the female characters became simplified.

Judging panel for the prize included Whitechapel Gallery director Iwona Blazwick, gallerist Pilar Corrias, collector Candida Gertler, artist Runa Islam and curator and writer Lisa Le Feuvre. Ms Blazwick said of Corin’s work: “Her sensitive eye and intelligent interpretation of theatrical devices and scenography has been transformed into an arresting and complex visual installation, which will take us on a memorable journey.”

Luigi Maramotti, chairman of Max Mara said: “The Max Mara Art Prize for Women in collaboration with the Whitechapel Gallery nurtures the creative talent of the next generation of female artists. In this fast-paced world we offer the gift of time in which to make a new work of art.”

Max Mara Art Prize for Women: Corin Sworn, exhibition is at the Whitechapel Gallery until July 19 2015, with admission free. The exhibition continues to the Collezione Maramotti gallery, Reggio Emilia, on October 3 2015