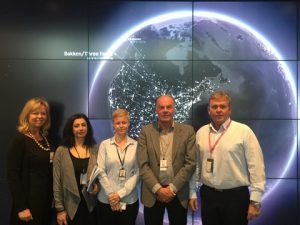 Dubai, 26 May 2015 – GAC EnvironHull has signed a contract with the international energy company Statoil to provide underwater hull cleaning services for its vessels operating in Scandinavia, the Middle East and the Far East.

From the second quarter of 2015, GAC EnvironHull, part of global shipping, logistics and marine services provider GAC Group, is using its pioneering HullWiper technology to remove fouling from the Statoil fleet of long term chartered vessels to enhance efficiency and reduce fuel consumption, whilst also preserving and protecting the delicate maritime environment.

HullWiper is a diver-free underwater hull Remote Operated Vehicle (ROV) which uses high pressure water jets to remove marine fouling. It can clean up to 2, 000 m² of hull per hour without causing any damage to anti-fouling surfaces. As no divers are involved, cleaning can be done alongside during loading or discharging operations, and any risk to life is significantly reduced. HullWiper cleans about five times faster than conventional cleaning methods, reducing the cleaning time by approximately half.

The entire process is in line with the GAC Group’s stringent Health, Safety, Security and Environment (HSSE) and compliance policies, as well as all local and regional environmental regulations. Residues and harmful marine growths captured during cleaning are disposed of in an environmentally-friendly manner instead of being discharged into the sea as done using traditional methods.

GAC EnvironHull’s agreement with Statoil ASA comes after the Norwegian-based company used HullWiper to clean the hull of one of its chartered vessels at Fujairah in the United Arab Emirates.

Simon Doran, Managing Director of GAC EnvironHull, says: “The energy industry focuses on minimising the impact of their operations on the environment and HullWiper meets their high green standards and eliminates the risk to human life.

“This contract represents an important milestone for GAC EnvironHull, as it further strengthens our steady position in a market with growing demands for cost efficient and eco-friendly technology.”

Launched in late 2013, GAC EnvironHull’s diver-free hull cleaning technology is now available in the Swedish port of Gothenburg, the ports of Jebel Ali, Sharjah and Fujairah in the United Arab Emirates, the port of Sohar in Oman and most recently in Singapore.

Paris MoU agrees on inspection campaign for MLC in 2016