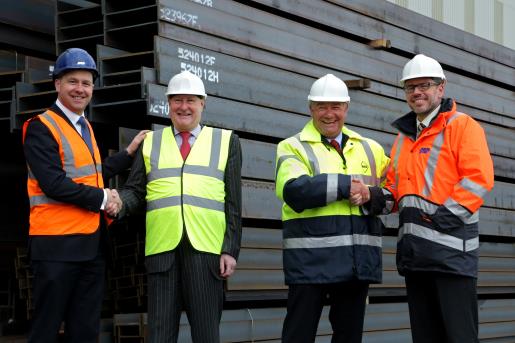 The relationship between Associated British Ports (ABP) and long-standing customer RMS Group looks set to strengthen following the signing of a new 15-year agreement, which will see the two work together to develop and grow RMS’ business.

This latest deal will see two of the Humber Estuary’s biggest businesses working closely to help cement the region’s role in the Northern Economic Powerhouse, a concept designed by Government to improve the economic performance of the North of England.

RMS Group has facilities on all four of the Humber ports, as well as their own terminal facilities on the River Trent. The business offers stevedoring, cargo handling and inland logistics for general cargoes and specialises in the steel and renewable energy sectors.

This new agreement will strengthen the companies’ existing relationship and provide a strong framework for growth throughout the Humber for RMS as ABP’s Head of Commercial, Humber James Leeson explains.

“RMS’ businesses on the Humber have grown considerably from their initial operations at the Port of Goole, ” said James. “The demands for new, renewable energy sources have resulted in significant growth, most notably in Grimsby and at RMS’ joint venture in Hull.

“ABP has invested £750, 000 in warehouse development to facilitate this growth in order to allow the company to better serve its customers, and this new agreement means we can look at further investment for RMS and extend our partnership with them for a further 15 years, which is something we’re very excited about.”

Ian Parsons Chairman of RMS Group said: “We look forward to further strengthening our longstanding partnership with ABP. The Humber estuary is poised for growth particularly in the renewable energy sector and signing this long-term agreement is a measure of our confidence in the future”.

Under the new agreement ABP will be working with RMS to attract new customers to their terminal operations and to ABP’s Humber ports and new investments have already been agreed for the company’s terminal at Grimsby’s Royal Dock.umber poortHum

Diana fixes the “Calipso” with CSBC and other news