Top Posts
The BDI drops down to 1,540; Wets maintain...
John Faraclas of All About Shipping contributes to...
Irene Rosberg addresses the 22nd Parliamentary Intelligence-Security Forum
Ready to hit the water? So are these...
Coach Fall/Winter 2022: A Collection That Feels Like...
Badgley Mischka Fall/Winter 2022: Wearable Sculpture in Ultra-Chic...
Power, philosophy and heroism of central bankers, and...
New superyacht goes up in flames
American Club Circular no.23/22 – EU Sanctions –...
Hot Port News from GAC
Ulla Johnson Fall/Winter 2022: Organic Forms and Nature’s...
American Club Member Alert (August 12, 2022) re...
Witherbys leads the way in digitisation as 5,000...
Home Associations Glorious Sunshine, an uncommon breeze and exceptional racing

The first day of racing at ISAF Sailing World Cup Weymouth and Portland sprung a few surprises with an uncommon north eastern breeze testing the fleet.

Ranging from 10-15 knots, the breeze coupled with glorious British sunshine, resulted in some exceptional racing on the 2012 Olympic waters.

The stakes have been described as high by the competitors competing in Great Britain and rightly so with internal Rio qualification battles on-going, ISAF Sailing World Cup honours, a share of the prize fund and Abu Dhabi Final spots up for grab.

Racing commenced at 11:00 local time and wrapped up early evening with the ten Olympic, three Paralympic and Kiteboarding events completing their race schedule.

New Zealand’s Andy Maloney came out with intent in the Laser, taking the day one lead with a strong performance as he explained,  “We had good breeze between 10 and 15 knots. It was pretty shifty on the course but I had good pace and played the shifts and managed to come away with a first and second which is pretty solid. It was a good day.”

The Road to Rio is a hard one and as well as international threats, Maloney also has to contend with domestic rivals on his journey. With the likes of his compatriots Sam Meech, Mike Bullot and Thomas Saunders all capable of challenging for medals, Maloney feels no internal pressure,  “It’s good for us and the Australians to have a good squad and we’re all pushing each other hard.

“It’s exciting more than anything now in the Laser because it’s coming down to the final part of the cycle so it’s crunch time now.” 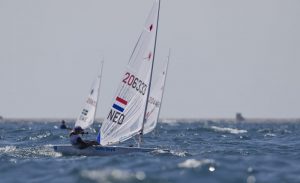 Yachting New Zealand named six crews for the Olympic Test Event on 18 May – see release here – . And as stated, will consider nominations the Laser following the World Cup Weymouth and Portland. A good performance by Maloney could go a long way for selection with Bullot in 15th, Saunders 20th and Sam Meech 21st after the opening day.

Nick Thompson (GBR) was not far off of Maloney’s pace, finishing behind him in both races to sit in second.

London 2012 Olympic silver medallist Pavlos Kontides (CYP) was almost as strong in Weymouth and Portland’s conditions as he did so well three years prior. A seventh and a fourth puts him third overall but he’s got his eye on the top,  “I’m satisfied with my performance and races today but there’s still a long way to go and I hope to move up. Having 40 top guys with this new ISAF World Cup, the stakes are high.

“You have to push to the end and every race counts. You can win this event without winning any races. Consistency will prove vital in the end.”

The day’s remaining race win went the way of Jesper Stalheim (SWE) who is fourth overall.

The last time Marit Bouwmeester (NED), Evi Van Acker (BEL) and Annalise Murphy (IRL) competed against each other at Weymouth and Portland they were locked in a battle for Olympic medals.

Fast forward three years and they’re fighting it out again at the ISAF Sailing World Cup.
Marit Bouwmeester (NED) was assertive on the race course, winning both races by a comfortable margin. The Dutch sailor, who won silver at London 2012, sits atop the pile with Evi Van Acker, London 2012 bronze medallist, trailing on five points following a 3-2 scoreline.

Murphy came through in second in the opening race and followed it up with a sixth in Race 2. She is third on eight points.

On the face of the 49er results it would be quick to assume that leaders Lukasz Przybytek and Pawel Kolodzinski (POL) were the stand out performers of the day. However, regattas aren’t won on the first they. It takes a consistent performance across five days of racing to come out on top and the most consistent team of the day were the first placed John Pink and Stu Bithell (GBR).

The pair recorded a 8-3-9 scoreline and were the only team to record three single digit scores. “On the first day of the regatta it’s always nice to start well and we’re thrilled to bits with three top tens. We’re fifth overall which is great and tomorrow brings another challenge because it’s going to be windy and we’ll be pushing on and hopefully get into that top three.

“It’s a great fleet, the top boats in the world are here and no one is really missing. It’s great that everyone is competing in the ISAF Sailing World Cup.”

Bithell won silver in the Men’s 470 at London 2012 and on his home waters he knows what the venue is all about,  “You could argue that I know Weymouth fairly well, ” he said with a smile. “I’ve lived here for some years now, did the Olympic Games here and is there a home advantage, ” he pondered,  “yes there probably is but incidentally we don’t always get the wind direction we had today.”

The Polish crew lead on seven points with Pink and Bithell four points off the leaders. Nathan Outteridge and Iain Jensen (AUS) and Dylan Fletcher and Alain Sign (GBR) are tied on 8 points in second and third.

It’s a British 1-2 in the Men’s RS:X and Women’s RS:X. Nick Dempsey and Tom Squires are locked on three points apiece in the men’s whilst Isobel Hamilton leads Bryony Shaw by a single point in the women’s.

From three races Dempsey and Squires took a race victory each with the third place Mattia Camboni (ITA) taking the other.

“We had nice racing, very close, ” exclaimed Dempsey. “Tom and I are quicker than the fleet. Our training’s gone really well and we’re starting to sail well. It’s nice and quite good fun racing.”

The pair train together on a daily basis which has helped them in the build-up to the regatta as Dempsey explained,  “It’s nice having a competitive training partner. When we train we know we’re training against one of the fastest people in the world.

“You never have to compensate. If you’re beating Tom then you know you’re going fast. That is what we’ve always missed having with our training partners so it’s brilliant news.”

In the Women’s RS:X, Hamilton enjoyed a solid day on the water, staying at the front of the pack notching up a 6-2-2 scoreline. “It was definitely my best first day at a World Cup so far, ” said the smiling Hamilton,  “I would love to be able to hold on to first for the whole week.

Shaw is a point off of Hamitlon after her 4-1-4 with London 2012 Olympic silver medallist Tuuli Petaja-Siren third overall. The day’s race wins went to Joanna Sterling (AUS), Shaw and Ingrid Puusta (EST).

Andrew Murdoch (NZL) opened his Weymouth and Portland account with a strong display in the Finn, notching up a 3-2 to lead the 24-boat fleet.

Murdoch, a 2012 OIympian in the Laser, used his experience to full effect at the front of the fleet. He has opened up a four point lead over Jonathan Lobert (FRA).

Giles Scott (GBR) took the opening race victory of the day and followed it up with a 12th. He is third overall. The remaining race victory went the way of Josh Junior (NZL) who is sixth overall but just three points off the third placed Scott.

It’s like London 2012 repeated in the Women’s 470 with the gold and silver medallists occupying the spots they claimed three years ago.

Gold medallists Jo Aleh and Polly Powrie (NZL) dominated the day by taking both bullets whilst silver Hannah Mills and Saskia Clark (GBR) were forced to look at the back of the Kiwi boat in both races as they settled for two seconds.

Tina Mrak and Veronika Macarol (SLO) sit in third after the opening two races following a 4-3.

In the Men’s 470, Stu McNay and David Hughes (USA) have a tasty six point lead over World #1 Panagiotis Mantis and Pavlos Kagialis (GRE). A fourth and a second gives them the lead at the early stage but with their experience, they won’t be getting carried away.

Victories on the day went to the Greeks and Ferdinand Gerz and Oliver Szymanski (GER) who are sixth overall.

As of 19:20 local time Thomas Zajac and Tanja Frank (AUT) lead the way in the Nacra 17. However, many of the competitors sailed the wrong course in Race 1 with Race Committee protests and vice versa. A handful of protests remain open that may result in further amendments.

As it stands the Austrians top the pile on four points followed by Matias Buhler and Nathalie Brugger (SUI) and Jason Waterhouse and Lisa Darmanin (AUS).

London 2012 Paralympic gold medallist Helena Lucas (GBR) began her World Cup campaign with intent. Double bullets give her a two point lead over Antonio Squizzato (ITA) who finished directly behind the Briton in both of the days races.

In the SKUD18, Marco Gualandris and Marta Zanetti (ITA) and Alexandra Rickham and Niki Birrell (GBR) are level on three points.

The Italian and British teams shared the top two places on the day, taking a bullet and a second apiece.

Will Street and Megan Pascoe (GBR) are third overall.

It is tight at the top in the Sonar with four crews locked on five points.

Norway’s Aleksander Wang-Hansen, Marie Solberg and Per Eugen Kristiansen took the opening bullet of the day and followed it up by a fourth.

John Robertson, Hannah Stodel and Steve Thomas (GBR) took the second bullet of the day but like the Norwegians also count a fourth.

Colin Harrison, Jonathan Harris and Russell Boaden (AUS) and John Twomey, Austrin O’Carroll and Ian Costelloe (IRL) notched up a second and a third each and are also tied with the Norwegian and Irish crews.

Racing resumes at 11:00 local time on Thursday 11 July with some great race action on the cards.