From all points of the compass in the capital they came, to launch the East London Export Club. It was an auspicious start for the latest London export club with a mission to support small and medium businesses seeking to conquer overseas markets.

A kaleidoscopic crowd represented banking, finance, trade and inter-cultural expertise; firms offering translation and other services; companies founded on “compassion and ethics”; specialities ranging from high-tech to exfoliation and other beauty treatments; public relations consultancy;, and many other products and practices – all seeking exponential growth.

Ade Awokoya, co-founder and export director of the East London Export Club, and who has worked as a business underwriter and mentor, said that the new venture was about “collaboration and sharing” and that the four speakers present for a question and answer session were “not just panellists, they have always been my supporters.” He said that the club, free to join, had a role in social media, “but at the end of the day, we all have to meet face to face, so we are trying to engender such meetings.”

Nick Howe, NatWest regional enterprise manager for London, welcomed guests to the hypermodern RBS group premises in Bishopsgate, which appropriately carries an east London postcode. He said it was important to use the benefits and resources of institutions such as the bank to help people in the community, and praised the vision and passion of Mr Awokoya in inspiring companies to sell more to overseas customers.

Keynote speaker Lesley Batchelor, director-general of the Institute of Export, said that companies needed to analyse how global trade was changing in a digital world. She cautioned against a careless attitude to the internet: 70% of people in the European community could not read English, and 87% of web users made searches in their own language. The dominance of English was fast declining. “I think it is key that we have to understand what linguists bring to the table. We have a lot of linguists and translators who are members [of the Institute] and it is important that we value them.” 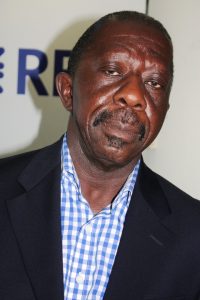 Ms Batchelor said that with English and nine other languages, “you can cover more than 85% of the world, and that is a huge bonus, ” but “language is not just about speaking to other people, it is about thinking how they should be addressed – adapt selling to make it appropriate to foreign culture. For example, we need to think carefully about the use of colours on our web pages. In China, a green hat indicates a man’s wife is cheating on him, or it could mean exorcism.”

It was important to remain aware of what is going on in the outside world and not get trapped in the world of the internet.

She reminded her audience that exporters had to get their goods across borders, collect money in other currencies and find out what was going on in changes of legislation. Payment of duty, value added tax, storage, warehousing and packaging were all factors demanding great attention. With recent financial results from Amazon citing huge costs incurred in shipping freight, “we need to think about how efficient we can be, ” said the Institute director-general. “Delivery is king, ” she added. “If you cannot deliver when you say you will, you will lose trade.” 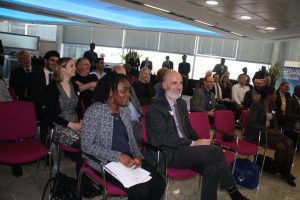 Section of the audience at the launch.

Ms Batchelor said that since the Institute was founded 80 years ago, it was remarkable how many of times the national message had been that we should be exporting ourselves out of a recession – “and that is what the Institute is about.” We had to start thinking about international trade as a career, as the Institute had done through its development of courses and qualifications.

Bryan Treherne, chairman of South London Export Club, underlined the role of languages. “If you want to sell in France, and you do not speak French, forget it. In other countries, they will put up with my bad French and Spanish, but whatever you do, learn a phrase or two. One of the reasons UK exporters can fail is because they do not bother to learn about cultures.” 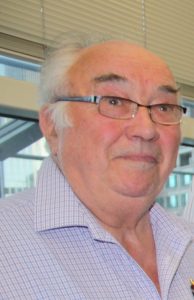 Mr Treherne concurred: “Use your banks.  They really are helpful.  Banks will do due diligence for you. Be friendly with banks and they will help you.”

Levent Yildizgoren, of the company ttc we translate, said: “Small companies think that going global is not for them, but global trade is essential for us and amounts to an important percentage of income.” He warned the audience that translators were not subject to regulation, and clients should look for reputable companies that were members of the Association of Translation Companies.

Jim Foxall, managing director of Ringshall Resources, spoke of his consultancy’s drive to assist clients in developing better business results, especially in UK and overseas sales. His company says that its operations and aims are inspired by the third Duke of Bridgewater, the 18th century canal builder who created the infrastructure for huge British industrial growth.

The founders of the East London Export Club have been spurred by the legacy of the 2012 Olympics They say that the Queen Elizabeth Olympic Park is at the heart of a new east London – one where diversity and cultural vibrancy meet economic growth. The club says that registered coaches from the GrowthAccelerator service can provide support for members.GrowthAccelerator is part of the Business Growth Service, a government-backed entity offering support to businesses with potential.

High hopes are pinned on the Royal Docks Enterprise Zone, subject of a £1bn deal with the Chinese firm Advanced Business Parks to create a trade hub for Asian businesses to invest in the UK. In June 2013, a £1.5bn contract was signed with the Silvertown Partnership to transform part of the zone into “the world’s first cluster of purpose-built pavilions for product innovation.” Other plans call for building the UK’s largest floating village at Royal Victoria Dock and an ABP business port at Royal Albert Dock.

All this regeneration makes East London the Gateway to Export, says the East London Club.

The well established South London Export Club is pushing on with plans to extend the Export Club movement across all regions, into Europe and beyond. It is creating a European platform to drive connections for businesses through to Chambers of Commerce with the same culture and business connectivity.

Mr Treherne says: “there is no better city than London to meet the world in one place.”