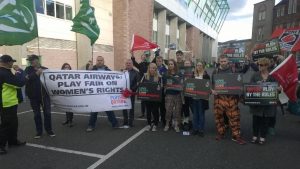 The ITF’s exposure of practices at Qatar Airways sparked criticism worldwide, including this protest at the recent Scotland vs Qatar football match. (Credit: Richie Vietch)

In a dramatic judgment – which  can be seen at http://goo.gl/gQnmZf – the ILO has found that:

The ILO Tripartite Committee also noted that the contractual bar on employees marrying in the first five years of service – after which they could only marry with company permission – has now been removed from the airline’s contracts, and ‘expresses the firm hope that the Government takes the necessary measures without delay to ensure that all cabin crew members are transferred under the new employment contract so as to be able to get married and change their marital status without the company’s permission’.

It also goes on to state that: ‘the Committee considers that particular attention should be given by the Government so as to encourage the company to provide its employees, including foreign employees, with appropriate complaint mechanisms to ensure that they can obtain redress without being exposed to stigmatisation or reprisals, and without the fear of being deported from the country, in cases of harassment or any other discriminatory behaviours based on the grounds set out in the Convention.’

It also noted, ‘the Government’s reply that various dispute settlement mechanisms are in place to handle complaints of migrant workers … the Government did not provide information on how these procedures can be or have been used by cabin crew, in particular women. The Committee observes that access to such procedures and remedies by cabin crew members, who are migrant workers, may be difficult because of the fear of victimization or reprisals, including dismissal and deportation from the country … given the large number of women in cabin crew staff, the appointment of trained women labour inspectors may be a positive measure’.

For two years the ITF has exposed discrimination and repressive practices at QR, including arbitrary dismissal, surveillance and curfews (see http://goo.gl/MzKq0Y) . Meanwhile the ITUC has challenged Qatar over the appalling treatment of migrant workers there.

ITF president Paddy Crumlin commented: “This decision is a game changer. A year ago we put Qatar and Qatar Airways in the dock and today it has been proved that we were right to do so. Everything has to change now. QR can no longer deny and evade. The changes made to the rules for staff failed to fool the ILO. Now the airline must make them for real. It’s time to make QR free from fear.

“Ever since we made those rules public we’ve made clear that they had to go. By revealing them we unleashed a torrent of stories of what it is like to work there. We congratulate all those, including those who bravely and secretly spoke to us from inside the airline, those in trade unions, in the wider aviation industry and in the media, who helped us decry these abuses.”

Sharan Burrow, ITUC general secretary, commented: “The attempts to tinker with the rules on pregnancy and marriage made once we brought this case show that Qatar Airways has been shamed into action – and more must come. We, along with everyone who works for the airline, will not rest until it addresses what many of those workers call the ‘climate of fear’ at QR.”

She continued: “The gaze of world opinion is locked on the behaviour of the Qatari government – over Qatar Airways, over its abhorrent treatment of migrant workers, and over the World Cup. In Geneva today Qatar has been proved wanting. We have shown that money doesn’t buy silence. The nation is on trial. It cannot evade its responsibilities. It has to begin to do the right thing.”