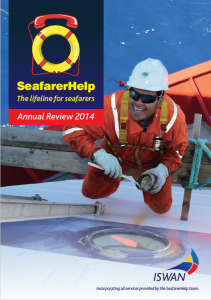 SeafarerHelp is the free 24 hour multi-lingual helpline for seafarers run by the not for profit organisation, the International Seafarers’ Welfare and Assistance Network (ISWAN).

The most common problems seafarers faced were upaid wages, problems with repatriation, contractual problems, sub-standard conditions on board and health issues. There were a lot calls requesting information and seeking employment.

Most of the contacts that SeafarerHelp receives are referred on to specialist organisations for direct assistance. These include the International Transport Workers’ Federation (ITF) and welfare organisations such as Mission to Seafarers, Apostleship of The Sea, and the Sailors Society. Other agencies who assisted included national embassies, harbour authorities, and medical service providers.

Roger Harris, Executive Director of ISWAN said “The SeafarerHelp team worked hard in 2014, working every hour of the day and night and every day of the year assisting seafarers. We wish to thank our funders and other supporters for enabling us to provide this vital lifeline for seafarers all over the world.”

Seafarers greatly value the service. One said “…your service is excellent …my problem is solved”. Another said “it was nice knowing that you were here for us when we needed help”. In a follow up survey 83% of respondents felt that the SeafarerHelp service was either excellent or good and 89% said that they would recommend using it to other seafarers.

The Annual Review can be downloaded from the ISWAN website and also fromhere.

The infographic can be downloaded from here.

Seafarers can contact SeafarerHelp 24 hours, 365 days per year, in the following ways :

Evonik and Duisburger Hafen: Joint venture for the development of Evonik’s Lülsdorf location