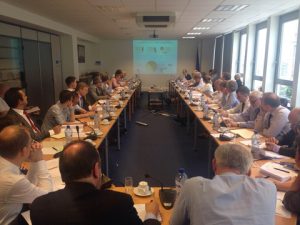 ECSA, the European Community Shipowners’ Associations, organised on 29 June, in cooperation with the European External Action Service and the European Commission, a very well attended workshop on the ways in which the shipping industry can get involved in the Gulf of Guinea Strategy and Action Plan. The workshop took place on the eve of a high-level conference on the maritime security situation in the Gulf of Guinea, bringing together EU and African stakeholders.

The recent EU strategy aims at supporting the efforts in the Gulf of Guinea and its coastal states to address the many challenges of maritime insecurity and organised crime by fostering regional cooperation, capacity building and economic development of the coastal areas.

At both events the message of the shipping industry was loud and clear: the situation must be addressed forthwith.

“The shipping industry is not only directly affected by pirate attacks in the area, but it is also an integral part of the long term solution as a vector of trade and, by extension, prosperity and growth. Regional specificities and different pirate practices mean that the solutions that have worked well in East Africa cannot simply be exported to the new piracy hotbed in the Gulf of Guinea” pointed out Mr Patrick Verhoeven, ECSA Secretary-General. “Private armed guards are less of a deterrent against heavily armed and more determined pirates, while the presence of foreign navies is harder to justify to West-African sovereign states.”

Commenting on the way forward, he added: “While the situation is complex, a lot can be done by raising maritime awareness, especialy by making use of systems provided by the European Maritime Safety Agency, better coordinating the naval assets already deployed and aligning EU-funded with other initiatives that aim at capacity building.”

“We welcome the Gulf of Guinea Strategy as it is both a good starting point and a tool tailored to address the many factors contributing to the phenomenon of maritime insecurity in this part of the world” continued Mr Verhoeven. “Now is the time to turn it into concrete action and the industry stands ready to work on that together with the EU and African partners” he concluded.

In recent times, pirate activity off the coast of Somalia and in the Indian Ocean has experienced a sharp drop, while pirate attacks and armed robberies have dramatically increased in the Gulf of Guinea. In 2014, 1035 seafarers were attacked in West Africa according to the NGO Oceans Beyond Piracy, while the real figure is certainly much higher, as most incidents remain unreported due to a lack of a trustworthy reporting centre.