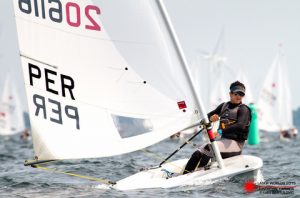 Thursday 9 July 2015 – Issued on behalf of ISAF – The 2015 Laser World Championship was the second opportunity for competitors in the Men’s One Person Dinghy to qualify for the Rio 2016 Olympic Sailing Competition.

Of the 46 places available on the Rio 2016 Laser startline, nine were up for grabs at the 2015 Worlds which were held in Kingston, Canada from 2-8 July 2015. The first qualification regatta, the Santander 2014 ISAF Sailing World Championships saw 24 nations secure a spot in Rio.

As hosts, Brazil automatically receives a place on the start line. Eleven places will be awarded via a series of Continental Qualification Events sanctioned by ISAF, to finish by 1 June 2016 at the latest. The remaining two places in the Laser will be decided via the International Olympic Committee Tripartite Commission.