World’s largest Shipment of biomass discharged at Port of Immingham 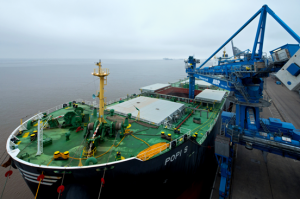 ABP’s continuous ship unloaders discharge around 60, 000 tonnes of biomass from the POPI S at the Port of Immingham (image courtesy of ABP/David Lee Photography

The world’s largest ever single shipment of biomass has been discharged on the quayside at Associated British Ports’ (ABP) Humber International Terminal (HIT) at the Port of Immingham ready for onward transit to Drax power station.

Almost 60, 000 tonnes of wood pellets were unloaded from the POPI S – the first time such cargo has been carried by a Panamax-class vessel. The ship was loaded at the Westview Terminal in Prince Rupert, British Columbia on 2 June, before making the 34-day journey to Immingham.

The pellets have been discharged using ABP’s bespoke continuous ship unloaders, which feed the product onto a conveyor system connected to Immingham Renewable Fuels Terminal (IRFT), where it will be stored in eight silos, each capable of holding 25, 000 tonnes of biomass, before being loaded onto trains for the final part of its journey.

The world-beating shipment forms part of ABP’s Humber-wide agreement with Drax Power Ltd, which will see it supply up to six million tonnes of biomass per year to the power station as part of its conversion to low carbon electricity generation.

ABP Director Humber, John Fitzgerald said: “This shipment marks a significant milestone not only in our partnership with Drax, but in the development of the biomass and renewable energy sectors globally.

“This is a very exciting time for our ‘Energy Estuary’ and we’re extremely proud to be at the forefront of the renewables industry on the Humber, working closely with partners including Drax, to drive innovation, boost the regional and national economy and fuel the Northern Economic Powerhouse.”

Drax Head of Supply Chain & Logistics, Graham Backhouse said: “This shipment provides further evidence of our new supply chain supporting the transition from coal to sustainable biomass at Drax.   We are transforming the UK’s largest Power Station into one of Europe’s largest generators of renewable electricity and this shipment is another example of how we provide the UK with sustainable, reliable and affordable energy.”