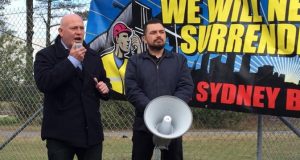 ITF general secretary Steve Cotton joined several Australian union leaders and over 200 union activists at a rally on 20 July to protest against the treatment of the Alexander Spirit crew by petroleum company Caltex.

The 36-strong crew remains on board the oil tanker Alexander Spirit, which has been languishing in Devonport, Australia for over three weeks, awaiting an order to sail to Singapore. The crew is contracted on the vessel until 2019 to transport Caltex fuel around Australia but learned that they would be sacked and replaced with a foreign crew when they arrived in Singapore. This came just a week before Caltex announced a half-year profit of USD375 million.

The MUA mounted industrial action but that was deemed illegal by the Fair Work Commission, which ordered it to cease. Five of the crew have left the ship on stress leave.

Leading the speeches, Steve Cotton said: “The ITF and its 4.6 million members bring their solidarity to Australian transport workers. We’ve watched what Caltex have been doing and we’re watching the situation over here about proper jobs for Australian men and women. Brothers and sisters we’re with you, long live the MUA.”

Paddy Crumlin, MUA national secretary and ITF president, criticised the Australian government for failing in its primary duty of protecting the Australian community, because it was not working to secure the future energy needs of the country.