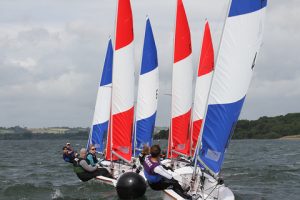 Tuesday 21 July 2015 – Issued on behalf of ISAF – The pace was kept high at Rutland Waters for day two of the 2015 ISAF Team Racing World Championships as the teams looked to secure their place in the Gold League.

Heading toward the business end of the regatta, teams were now fighting for consistency and race results to ensure they make the impending cut to Gold and Silver Leagues.

The day started with winds of 11 knots, but soon increased to gusts up to 30 knots which made the race committee cut-down sails as the teams began to fight against the elements.

With sunshine and steady, strong wind for the rest of the day, the teams were put to the test as the event progressed towards the first crucial break point – race 153 and the end of the first round robin.

When that time came early afternoon, GBR 2 were the leading the contenders with a strong 16 wins out of 17 races. They were followed by USA 1 in second place and GBR 1 in third, both tied on 15 wins, with USA 1 taking second with a strong 124 combination in the closing races of the round.

Fourth and fifth places were held by USA 2 and USA 3 respectively on 14 wins each.

By the end of the day, 210 races had been completed and GBR 2 had continued their run of good fortune dropping only one race to retain the overnight lead with 21 wins out of 23 races.

Further down the board, and safe at the moment for a Gold League position, BER 1 are lying seventh, IRL 1 in eighth and GBR Youth 1 in ninth.

Racing continues on Wednesday with AUS 1, USA Youth 1, JPN 1 and AUS 2 still in the running for the Gold League if they can improve their win rate during the final stages of the round-robin.