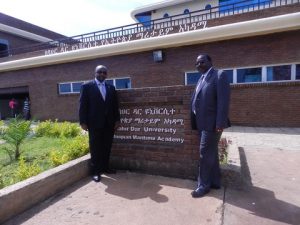 Officials from the International Maritime Organization (IMO) recently completed a fact-finding mission to the Ethiopian Maritime Training Institute (EMTI) in Bahir Dar, Ethiopia. Juvenal Shiundu and William Azuh from IMO’s Technical Co-operation Division, assisted by officials from the Ethiopian Maritime Affairs Authority and from EMTI, undertook the mission as part of an effort to give effect to this year’s World Maritime Day theme of Maritime Education and Training.

EMTI provides specialised training for deck, engineer and electro-technical officers for ships, in compliance with the IMO’s STCW Convention, which specifies global standards of training, certification and watchkeeping for seafarers.

A partnership between Bahir Dar University and the US-based investment firm, YCF Group, EMTI currently graduates up to 500 cadets per year, and plans soon to expand its capacity to train over 1, 000 seafarers annually. After completing a rigorous training programme at the maritime academy, EMTI cadets begin their careers as junior crew members with leading shipping companies on a global basis.

The demand for Ethiopian seafarers has grown rapidly in recent years, and EMTI is the exclusive marine officer training academy in Ethiopia. During a recent visit to EMTI in Bahir Dar, the Honorable Patricia M Haslach, the US Ambassador to Ethiopia, said, “The US has an old and cherished maritime heritage, and we are pleased and excited to help foster a maritime tradition in Ethiopia as well.”

Pini Shwartz, CEO of EMTI, says, “We are greatly encouraged by the interest shown in EMTI by IMO, whose representatives acknowledged during their recent fact-finding mission the progress made by EMTI since it was set up in 2008. They also offered advice on ways to maintain – and, where possible, improve – the effectiveness of the academy, plus assistance with the likes of IMO publications and reference books, which is greatly appreciated.

“EMTI has developed rapidly in a relatively short period of time to become one of the largest quality maritime training institutes in the world, with vast potential for further growth. That growth, of course, will be achieved in line with IMO standards and ideals.”