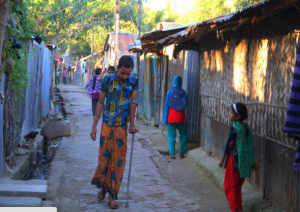 Ebrahim walking again in his home village, thanks to an operation performed on his leg

Brussels,  30 July 2015 – The NGO Shipbreaking Platform publishes today the sixth South Asia Quarterly Update, a briefing paper in which it informs about the shipbreaking industry in Bangladesh, India and Pakistan. Providing an overview of vessels broken on the beaches of South Asia, accidents, recent on-the-ground, legislative and political developments including our activities in South Asia we aim to inform the public about the negative impacts of substandard shipbreaking practices as well as positive steps aimed at the realisation of environmental justice and the protection of workers’ rights.

In this sixth edition of the update we inform amongst others about recent cases of workers killed or injured in shipbreaking yards. Between April and July 2015, the Platform documented at least six fatal accidents in the shipbreaking yards in Bangladesh. It recorded three severe injuries in these three months. In the month of July only, at least five workers died in various accidents. We also inform about the operation on Ebrahim’s leg, a 15-year-old worker, thanks to private donations made by people who saw a documentary about shipbreaking filmed last year in Chittagong.

213 large commercial vessels were sold for breaking in the second quarter of 2015, including 136 end-of-life ships that were beached in South Asia, most of which ended up in Alang or Mumbai in India (52 ships), Chittagong in Bangladesh (47 ships), and Gadani in Pakistan (37 ships).

Download the #6 here or by clicking on the report below: