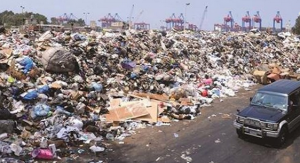 “We will not accept our port becoming the capital’s dumping ground.”

That from the president of the Union of Beirut Port Employees after thousands of tons of rubbish was offloaded at the entrance to the port.

It’s the Lebanese government’s response to a growing waste crisis in the country caused by a halt in rubbish collections following the closure of Beirut’s largest landfill site near the village of Naameh.

A global ITF campaign has been launched in support of the union with transport workers being asked to demonstrate their solidarity and call on the government for immediate action.

The union held a warning strike on 13 August as part of its attempt to safeguard the health and safety of workers and other port users. Union president Bchara Asmar said: “The health of all who enter the port is at risk, workers, visitors and customers. We want the port authorities to talk to the union; we want to avoid further escalation to open-ended strike.” There are also calls for the urgent removal of the current waste and scrapping of plans to make a permanent dumpsite in and around the port.

Go to the campaign page to support workers in the Port of Beirut and the citizens of Lebanon, and tell the government to find a solution to the crisis which doesn’t compromise health and safety.

GO TO THE CAMPAIGN PAGE

BEIRUT PORT AT A STANDSTILL