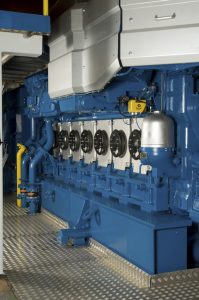 Picture of the Wärtsilä 34DF engine

Wärtsilä Corporation, 27 August 2015 at 10 am EET – The upgraded version of the Wärtsilä 34DF engine is rapidly becoming established as an industry standard. The three major South Korean shipyards are supporting the use of this engine for auxiliary applications in the LNG Carrier segment where dual-fuel engines are favoured. South Korea currently has more than 80% of the total order book for LNG tankers, while the Wärtsilä 34DF engine has achieved an auxiliary application market share of approximately 70% in this sector.

During the first half of this year Wärtsilä has been awarded contracts for 56 Wärtsilä 34DF dual-fuel auxiliary engines for 14 new LNG Carriers being built for four different owners. This means that Wärtsilä has already received orders for nearly 100 such engines from these three yards since it was re-launched with a higher MCR (maximum continuous rating) in 2013. All these orders were placed by South Korea’s three leading shipyards and the ships are being built for European, American, and Asian owners.

“The Wärtsilä 34DF dual-fuel engine is a powerful, versatile, and efficient engine that is helping shipping move into the gas age. The impressive track record of 100 engines sold in a two year period speaks for itself. While the success has been universal, with contracts from yards and owners globally, the fact that the world’s largest shipbuilding nation, South Korea, is increasingly opting for the Wärtsilä 34DF is especially gratifying, ” says Lars Anderson, Vice President, Engine Sales, Wärtsilä Marine Solutions.

The Wärtsilä 34DF was originally introduced in 2008 and was based on the successful Wärtsilä 32 engine platform. In 2013 it was upgraded to provide 11 percent more power and increased efficiency without changing the physical dimensions. The upgraded version has a power output range from 3, 000 to 10, 000 kW at 500 kW per cylinder.

In 2014, Wärtsilä’s net sales totalled EUR 4.8 billion with approximately 17, 700 employees. The company has operations in more than 200 locations in nearly 70 countries around the world. Wärtsilä is listed on Nasdaq Helsinki, Finland.