Autonomous ships – What does the future hold? 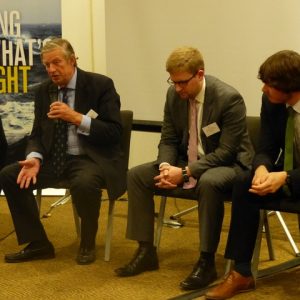 Unmanned vessels are already a reality in today’s shipping industry, and will play a larger role in future, delegates to The Nautical Institute’s latest seminar were told. More than seventy people attended London Branch’s two-day event in Bristol “Autonomous ships; what does the future hold?”, where a wide range of speakers from class, regulatory authorities, developers and operators outlined what might be in prospect for the industry.

“Automated ships are here today, already, in all sorts of shapes and sizes, used for science, for research, for defence and in the oil and gas industry, among other things, ” said James Fanshawe, chair of the UK’s Maritime Autonomous Systems (MAS) regulatory working group, in his keynote address. As vessel sizes increase, they will have to be integrated into a well-established maritime world with many complexities in place, he warned.  “The MAS is determined that they should be brought in sensitively and recognising the concerns of all involved.”

Over two days of high level presentations and animated discussion, some of the most important points to come out included:

While it will be many years yet before fully unmanned merchant ships become a reality – if they ever do – it is vital that the industry starts thinking about the implications of the potential change at an early stage. Only this way can it ensure that the training, skills and knowledge are in place to maintain the safety and profitability of the industry.

The Nautical Institute is an international representative body for maritime professionals involved in the control of sea-going ships. We provide a wide range of services to enhance the professional standing and knowledge of members who are drawn from all sectors of the maritime world.