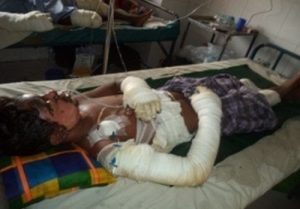 Brussels,  16 October 2015 – The NGO Shipbreaking Platform publishes today the seventh South Asia Quarterly Update, a briefing paper in which it informs about the shipbreaking industry in Bangladesh, India and Pakistan. Providing an overview of vessels broken on the beaches of South Asia, accidents, recent on-the-ground, legislative and political developments including our activities in South Asia we aim to inform the public about the negative impacts of substandard shipbreaking practices as well as positive steps aimed at the realisation of environmental justice and the protection of workers’ rights.

In this edition you can read about the Pakistan government’s plans to clean up Gadani; that two Indian yards have received certification from a Japanese classification society for being compliant with the requirements of the Hong Kong Convention; and that the Norwegian Shipowners’ Association has adopted a position against substandard shipbreaking practices. 166 large commercial vessels were sold for breaking in the third quarter of 2015, 78 of these were beached in South Asia. Three major accidents due to gas explosions killed five workers and severely injured ten, bringing the total death toll this year in Bangladesh to 12.

Arnaud Boissières on the starting line of the Transat Jacques Vabre,

The Transportation problem of Chios and proposals to solve it