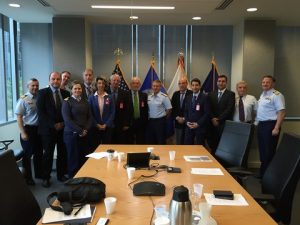 HELMEPA Members discuss issues of concern with the United States Coast Guard at their 3rd annual meeting in Washington, DC

On Wednesday 14 October 2015, the third annual meeting of HELMEPA member operators and the United States Coast Guard took place at the CG headquarters, in Washington, DC. A delegation of six representatives of the following companies participated in the meeting hosted and chaired by Rear Admiral Paul Thomas, Assistant Commandant for Prevention Policy, USCG:

Present from the Coast Guard were also throughout the meeting: Mr. Jeff Lantz, Director of Commercial Regulations & Standards and Mr. Frank Sturm, his Deputy Director and Capt. Verne Gifford, Director, Inspections & Compliance while a number of officers participated in the discussion of specific Agenda items according to their field of expertise.

HELMEPA was represented by its Director General Dimitris Mitsatsos and the Executive Coordinator Christiana Prekezes.

RADM Thomas welcomed the delegation and expressed the Coast Guard’s appreciation to HELMEPA for the Press Release issued on the recent tragic loss of “El Faro” stating how difficult it has been, after the weeklong effort, to suspend search and rescue operations.

Following a brief introduction by Mr. Mitsatsos, the Agenda items were discussed, specific points of concern were raised by the companies’ representatives and answers were provided by competent CG officers. In certain areas where further examination was deemed necessary, member companies are to provide data and the Coast Guard to respond accordingly in due course.

Topics raised included, among other, ballast water management, implementation of specific MARPOL requirements, adequacy of shore reception facilities, Port State control inspections and cyber risk. Useful information was provided by the responsible CG officers and all latest developments on the subjects were discussed.

Furthermore, issues not regulated by the Coast Guard but of concern to operators and vessels trading in the US were put forward and RADM Thomas stated that they would be glad to bring them to the attention of the competent agencies as these can affect the safe and efficient conduct of vessel operations. He added that the Coast Guard appreciates the opportunity to hear from the industry directly on issues of importance to them.

Mr. Mitsatsos wrapped up the discussions expressing the sincere appreciation of all present to RADM Thomas for hosting the meeting and to all Coast Guard officials and officers for their constructive input. The Admiral, concluding the 3-hour long meeting, reiterated CG’s intention to continue this initiative in the future within the framework of facilitating safe, secure and environmentally maritime commerce in US waters.

Trimline makes key appointments to new Board of Directors