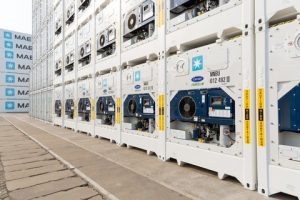 The order is among the largest ever placed for PrimeLINE units. The units are being installed on 40-foot high-cube containers for replacement and expansion of Maersk’s refrigerated container fleet. The PrimeLINE unit’s exceptional energy efficiency will help Maersk Line move toward its 2020 target for improving carbon dioxide efficiency by 30 percent, relative to a 2010 baseline.
“Over the course of a relationship spanning nearly three decades, Carrier and Maersk have worked together to make significant advancements in reducing shipboard energy consumption while lowering emissions, ” said David Appel, president, Carrier Transicold & Refrigeration. “With the addition of these PrimeLINE units to its fleet, Maersk Line continues to advance its bold sustainability initiatives.”
The PrimeLINE unit has been meeting Maersk Line’s stringent total cost of ownership requirements since it was first introduced into the fleet in 2007. The units make significant operational and environmental improvements by reducing shipboard energy production requirements and associated greenhouse gas emissions. Including prior purchases, Maersk Line’s PrimeLINE units, in normal operating modes, are expected to save enough energy over their lifetimes to eliminate more than 1.6 million tons of carbon dioxide-equivalent emissions relative to industry average. That’s equivalent to removing nearly 27, 000 cars from the road over the same period.
The PrimeLINE unit is also known for best-in-class pulldown among all container refrigeration units, as well as best deep-frozen capability among those that use non-ozone-depleting R-134a. No other container refrigeration unit provides dehumidification capability lower than the PrimeLINE unit, and none can achieve 50 percent relative humidity as efficiently.
For more information about PrimeLINE units from Carrier Transicold, visit www.carrier.com/container.
About Carrier Transicold
Carrier Transicold helps improve transport and shipping of temperature controlled cargoes with a complete line of equipment and services for refrigerated transport and cold chain visibility. For more than 40 years, Carrier Transicold has been an industry leader, providing customers around the world with the most advanced, energy-efficient and environmentally sustainable container refrigeration systems and generator sets, direct-drive and diesel truck units, and trailer refrigeration systems. Carrier Transicold is a part of UTC Climate, Controls & Security, a unit of United Technologies Corp., a leading provider to the aerospace and building systems industries worldwide. For more information, visit www.transicold.carrier.com. Follow Carrier on Twitter: @SmartColdChain
Carrier TransicoldMaersk Line
0 comment
0
FacebookTwitterLinkedinEmail

This year marks 160 years of the Shipowners’ Club